A very important game in the upcoming round of La Liga is the Espanyol vs Rayo Vallecano duel, so here's our preview of this match followed by some free betting tips.

Our favourite Espanyol vs Rayo Vallecano betting predictions and tips

If you are not sure what is the right bet for Espanyol vs Rayo Vallecano, check our top betting tips for this game right here:

Espanyol and Rayo Vallecano to Draw

The home team has done much better lately compared to Rayo Vallecano, but we can see this game ending without a winner since the guests need the points while Espanyol is safe in the middle of the standings.

In addition to this, Rayo Vallecano beat Espanyol in their last four h2h duels, but they are also without a win in the league for the last thirteen games, so a draw sounds like the most reasonable outcome.

Three of the last five head-to-head meetings between Espanyol and Rayo Vallecano have gone under 2.5 total goals and we can see that being the case again in their next duel.

The top odds and key figures for Espanyol vs Rayo Vallecano

If you are looking for the best La Liga betting odds, including the odds for Espanyol vs Rayo Vallecano, you've come to the right place:

With both teams in similar forms at the moment, this can be a very interesting game. So, let's take a closer look at both teams now:

With three wins in the last six games in La Liga, Espanyol has done well lately and they are sitting comfortably in the middle of the table at the moment. The team will likely remain there come the end of the season, which is probably enough for the fans since Espanyol just got back to La Liga this season.

In addition to this, the team is also fully healthy at the moment. Even Yangel Herrera will be back in the team after serving a suspension over the weekend.

A lot of time passed since Rayo Vallecano managed to get a win in La Liga since that happened thirteen rounds ago. However, thanks to the fantastic first half of the season where they were among the top teams at one point, Rayo Vallecano is still not in an immediate danger of relegation, although they are now five points ahead of the first team in the relegation zone.

Meanwhile, Martin Merquelanz, Esteban Saveljich, and Radamel Falcao remain out of the team through injuries, while Ivan Balliu will have to miss the next match to serve a suspension.

The usual questions for Espanyol vs Rayo Vallecano 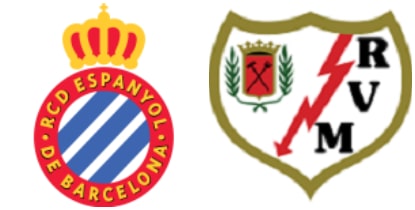