The Barcelona vs Rayo Vallecano duel scheduled for Sunday is a postponed game from Round 21 of La Liga and the only match of the Spanish league to be played this weekend. So, here's our preview of the game just for you.

Our free Barcelona vs Rayo Vallecano betting predictions and tips

If you are not sure what is the right bet for Barcelona vs Rayo Vallecano, check our top betting tips for this duel:

Although Rayo Vallecano finally broke their streak of thirteen games without a win by beating Espanyol in the last round, they don't have many reasons for optimism ahead of this game.

Barcelona is simply a few classes above them and they will play hard in this game since they are trying to secure a spot in the Champoins League for the next season. So, we expect a convincing win for Barcelona in this game.

The top odds and key stats for Barcelona vs Rayo Vallecano

If you want to bet on the best Barcelona vs Rayo Vallecano odds, check our list of odds from a the top bookies in the UK:

While the home team is the clear favourite in this game, we can see this being an exciting duel. So, let's take a closer look at both teams:

After two shocking losses at home, Barcelona got back on the winning track with a good win against Real Sociedad in San Sebastian. And while Real Madrid is likely too far away for Barcelona to consider winning a title, they need to keep winning to keep the hope alive as long as possible and to secure a spot in the Champions League for next season.

When it comes to team news, Barcelona will be without Samuel Umtiti, Pedro, and Sergi Roberto for this game through injuries, while Ansu Fati is still waiting for his return from injury. A few other players have picked up knocks against Real Sociedad, but they will likely be ready for this one.

After thirteen rounds in La Liga without a win, Rayo Vallecano finally managed to get three points from a game by beating Espanyol in the last round. With this win, Rayo Vallecano basically ensured their position in La Liga for next season as well since they are now seven points ahead of Granada, the first team in the relegation zone.

Meanwhile, Martin Merquelanz and Esteban Saveljich remain out of the team with injuries, but Ivan Balliu will be back this weekend after missing the last game to serve a suspension.

The usual questions for Espanyol vs Rayo Vallecano 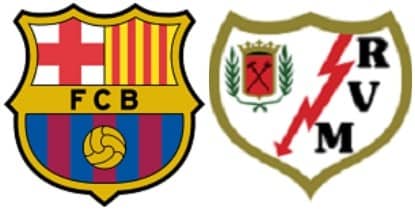