QPR might have a mathematical chance of making the playoffs still but a realistic outlook makes it seem unlikely. Can they find a result and performance to make their fans believe once again? Find out with our Stoke vs Queens Park Rangers match preview with free tips, predictions and odds mentioned along the way.

Queens Park Rangers have had a poor run of form recently; although they are coming off a win, they have managed just the one win in their last seven games. As a matter of fact, QPR lost five of their last seven games. Also, it's fair to point out that QPR's only win in that stretch came at home, they have struggled to win games away from home; QPR lost seven of their last nine road games, with just one win and one draw. In comparison, Stoke City have been relatively better than QPR lately; they have four wins in their last six games. Considering QPR's poor form, coupled with their struggles on the road, Stoke City should be able to win this game.

Stoke to open the scoring

We've mentioned that QPR have five losses in their last seven games; we should also point out that they haven't been able to keep the goals out recently. QPR have seen their defence breached in 15 of their last 16 games. Because of the way they concede, Queens Park Rangers have a tendency to concede first; Mark Warburton's men allowed the first goal in four of their last five games. In contrast, Stoke City found the back of the net in eight of their last nine games; they drew first blood in six of their last eight games. Considering QPR tend to concede first, we believe that Stoke will open the scoring.

You have to feel for fans of Queens Park Rangers. They were so good for so long but it looks to have gone wrong at the worst possible time. For Stoke, their season has long been done but winning games of this nature will do them no harm ahead of a big summer.

Stoke City have had a fairly decent run of form in recent weeks; they have four wins in their last six games, with two losses. Michael O'Neill's men will take on Queens Park Rangers on Saturday; they'll hope to take all three points from this game.

Queens Park Rangers confirmed Derby's relegation to the League One by beating them a couple of days ago; that was their first win in seven games. QPR will visit the Bet365 Stadium on Saturday; they'll hope to string up consecutive wins for the first time since January.

A quickfire FAQ on Stoke vs Queens Park Rangers 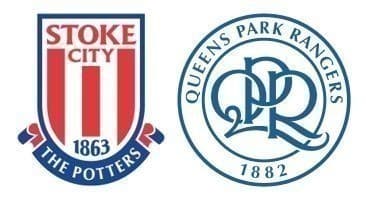