QPR got back to winning ways in the week to ensure positivity remained in the camp. Can they build on that with another home win as Preston come to town? Find out with our QPR vs Preston match preview with free tips, predictions and odds mentioned along the way.

QPR vs Preston: A Trio of Tips

We begin our QPR vs Preston predictions by backing the home team to grab the three points. They had been having a wobble but got back to winning ways in the week by seeing off Birmingham in front of their home fans. Preston haven't been winning too many matches of late with just one win in six and therefore we fancy the hosts to make it six points from six. That would firmly put the QPR season back on track.

Cover a draw with ‘no bet' for added comfort

We've just touched on the fact that Preston haven't been winning many matches of late. What we didn't touch on is the fact that they've also not lost in nine. Five of their last six matches have ended level. In our view, that's the one question mark you could hang on the QPR win prediction we've just discussed. With the draw no bet market though, you'd retain your stake if Preston chalk up a sixth draw in seven.

Our final prediction comes from the total goals market as we back the match to go over 2.5 goals. QPR have seen four of their past five games go over 2.5 goals. Preston's recent form isn't quite as convincing with just two of five matches hitting three goals. That said, their average goals per game in that time does wash through at 2.6. To further emphasise our reasoning for the over 2.5 goals prediction we would draw your attention to the fact QPR sit second in the league on average goals per game with a rather impressive 3.3.

Find the best odds for QPR vs Preston

QPR started the season really well but a few defeats brought them crashing back down to Earth. They produced a decent display on Tuesday though. The man behind that victory was Ilias Chair; he bagged both goals in their 2-0 win to end an eight game drought. With Charlie Austin, Lyndon Dykes and Andre Gray also in attacking positions they will frighten any defence. Preston won't be too intimidated though; they're in good form and must barely remember what defeat feels like after going nine unbeaten. If they could turn a few draws into wins, they'd be laughing.

Our final thoughts on QPR vs Preston 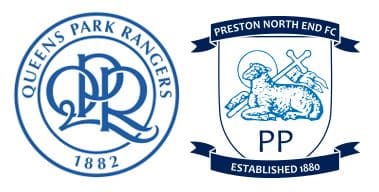