PSV Eindhoven will host Volendam in the postponed game from Round 3 of Dutch Eredivisie on Wednesday, August 31st. If you are interested in this game and want to know more, check our preview of the match and our free betting predictions.

Our Favourite PSV vs Volendam Betting Picks and Tips

If you need some assistance to decide on the best bet for PSV vs Volendam, you can check our top betting tips for this duel right here:

Volendam to Win with Handicap (+3)

The team from Eindhoven had a great start of the season, winning all three of their matches in Eredivisie so far by three or more goals. Meanwhile, Volendam has four points from the first three games.

Clearly, PSV is the absolute favourite in this game and their win is not in question. However, despite everything, we don't see them being as convincing as many expect. After all, both of their last two duels against Volendam ended 2-0 for PSV. With that in mind, we can see Volendam winning this game on a +3 handicap.

Once again, our prediction is going against the grain and it is probably unexpected for many. After all, we don't expect to see more than three goals in this game even though PSV averaged 6.33 goals per game and Volendam 3.33 goals per game in the league so far.

However, the last two h2h meetings between PSV and Volendam have both gone under 3.5 total goals. In fact, they both went under 2.5 total goals, so we feel it's worth taking a punt at this betting market.

The Top Odds and Key Stats for PSV vs Volendam

You don't have to spend a lot of time looking for the best PSV vs Volendam odds – you can check them all out right here:

The guests are obviously the heavy outsiders in this game, but this can still be an interesting duel. Let's check the teams out in more detail:

Although PSV can be very happy with their start of the season in Eredivisie where they have three wins from three games and a goal difference of +11, they also suffered a tough loss to Rangers in the final round of Champions League Qualifiers. On the bright side, at least PSV gets to play in group stages of Europa League this season.

When it comes to team news, PSV is currently without injured Yorbe Vertessen, Mauro Junior, Marco van Ginkel and Noni Madueke, with a few other players questionable as well, like Luuk de Jong and Richard Ledezma.

The newly-promoted Volendam is certainly one of the main candidates for relegation this season, but the team started their journey in Eredivisie in solid form. After all, they have one win, one draw, and one loss after the first three rounds, during which the team beat Twente and drew with Groningen. So, their fans have reasons to be optimistic right now.

Meanwhile, Calvin Twigt, Josh Flint, and Oskar Buur are currently down with injuries and they will miss the next game. 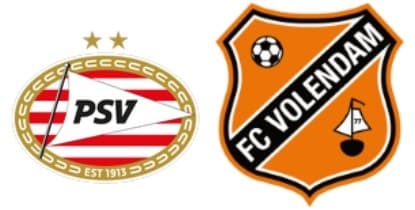