Angers will host Ligue 1 giants, PSG in a midweek fixture. PSG look to reinstate their place on the crown and there is no stopping the Parisians now. At the top of the table and six games to play, a win in this game will be enough to hand PSG the crown. Will Angers stop Pochettino’s march to the title? Find out in this post.

This is the safest time to put a bet on PSG. After a win in this game, the Parisians will have relaxed in their quest for the crown as it would be enough to earn them the coveted price. Find out how we have tipped this game to end in our free predictions and tips for the Ligue 1 duel below.

A chance to bag the Ligue 1 title with five games to spare is the desire of the Parisians. It couldn’t been timelier than now. PSG faces struggling Angers in the 33rd game of the season on the back of some impressive performance. While Angers won only one of their last five games, PSG bagged victory in four of as many games. Notably, PSG defeated Angers in all the last 13 meetings and we expect another massive win for them in this game.

This should be a sail-through for PSG. However, Angers also have something for which to play. The hosts are only five points from relegation, so we expect Angers to put in the effort not to concede a lot of goals on matchday. We are tipping 2 to 3 goals to be scored in this match.

Here are the best odds and current stats for Angers vs PSG Ligue 1 fixture.

Angers will miss three key players in this duel namely Cabot who is nursing a sprained ankle, Lage is out with kness injury while Bahoken is away with thigh injury. On the other hand, PSG will be without Diallo, Herrera, Gharbi, Draxler, Kurzawa and Peredes. Neymar will be out serving a suspension.

PSG won all the last 13 meetings with Angers and given how the hosts have performed in recent games, this should be an easy win for the Parisians.

The following are the predicted lineups for this game: 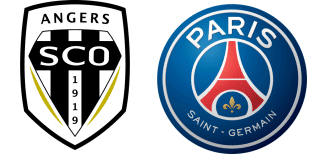 Who will referee Angers vs PSG Ligue 1 match?

Johan Hamel is slated to undertake refereeing duties in this game.

What time will Angers vs PSG Ligue 1 game start?

Where will Angers host PSG in this game?