One of the ways to identify and value the chances in football is through the metric of ‘Expected Goals’. It has become quite popular in recent years with many Premier League experts and analysts deciding to use the same.

Expected Goals is a metric that is used to denote the likelihood of a short turning into a goal and it is usually expressed in the numbers from 0 to 1. A lot of historical data and factors are taken into account for the calculation of this metric. This data is useful in identifying the number of goals that a team or player will have the opportunity to score in a specific match. The world of advanced metrics – like Expected Goals – has already been in use in many other sports like American football and basketball. Now, it has started making its presence into football as well.

It was a widely used practice of using the ‘shots on target’ statistics to make predictions and analysis of the number of goals that a game is likely to witness. However, these have turned out to be very deceptive over the years. For example, let us consider the match where two teams (Chelsea and Arsenal) are going up against each other at a neutral venue. Arsenal end up having 16 shots on target whereas Chelsea only have four shots on target. A mere look at the ‘shots on target’ statistics will show that Arsenal are strong contenders to come out successful. Yet, the expected goals data will reveal a different story. In the xG criteria, Chelsea will be able to come out on top with a figure of 2.10 compared to a 1.30 xG for Arsenal.

Similarly, the ‘Expected Goals’ metric is able to shine ahead of others by virtue of considering other factors like the player who is striking the ball and goalkeeper who is between the sticks. Since both these factors are once again measured and implemented in the xG value, this metric turns out to be a lot more accurate.

How to calculate Expected Goals (xG)

Since a number of parameters are taken into account for the calculation of Expected Goals, it is not an easy job. Opta, who happen to be one of the world leaders in terms of statistics in sports, use the data from more than 300,000 shots to arrive at a model. Some of the different variables which are taken into account would be:

The passage of play could be anything from a set piece or open play. A player can shoot from different scenarios, but a crucial importance is provided to the factors like shooting technique and shot angle. The former is about the impact provided by a shot from the weaker foot, while a different number is introduced in the case of a header. The chance creation has a role to play since the ball could be delivered to the shooter through different means like a through ball or a cross.

The distance from goal has a major influence on the likelihood of scoring the goal. If a player is quite close to the goal, the shot gets a higher xG figure and it decreases with the increasing distance to goal. Similarly, if the shot is from an acute angle, the xG is given a lower value.

Effective use of Expected Goals figure

The biggest advantage of ‘Expected Goals’ metric can be seen in the world of sports betting. Unlike basketball, football does not involve big scores. Since goals are a rare commodity in the game, the punter who makes an accurate prediction regarding the same can be quite good. Many other statistics like possession and territorial advantage do not count for anything if the team loses a game after dominating in all these areas. Thus, xG figures can be used for making better prediction since this is one statistic which has a closer relation to the final score than any other statistic.

There is opportunity to make successful bets in the world of ante-post market is if a punter makes a selection back by solid figures rather than just instinct. The impact of Expected Goals is profound in this market, as a punter can use the same to make predictions with regard to upcoming matches. They are also capable of expanding their limits to new horizons, as this metric will allow long-term predictions like Golden Boot winners and league champions. This can be done by comparing and analysing the xG from previous seasons.

The Expected Goals metric is excellent when it comes to identifying value. There is a high likelihood of teams being around there average xG figures. If they have been deviating exceedingly from these figures, one can appropriately bet against or for the team to make some short-term success. If there is a sufficient backing from the xG data for the research that has already been done, it is very likely that the bet that you have come across is good value.

Match of the Day shocked viewers this season with their use of the expected goals (xG) stat. It's a way to quantify high-quality chances created in a match and is a tool that helps paint a more well-rounded and accurate picture of a game.

In the past a sign of domination has been possession coupled with shots attempted. But the latter doesn't detail where the shots were taken, which can lead to a false reading. But if a team is having 15 shots from 30-yards their xG will be low as shots from distance aren't high quality chances.

While xG is not a stat to be used in isolation, it can be key when analysing previous matches over a large sample size. For example, a team underperforming their xG may need to invest in a better striker because they're failing to convert their quality chances.

Likewise, there's a stat looking at expected goals against (xGA). This helps reveal whether a team famed for resilience actually has a brilliant defence or whether they're heavily reliant on a world class goalkeeper.

And using the data from Understat.com, we've taken a look at the sides who have over and underperformed their xG and xGA in the Premier League since the start of the 2015/16 campaign.

The findings are certainly eye-opening.

In terms of goals scored versus xG, it's Chelsea who top the list. The Blues have outperformed their xG tally by a staggering 33.68 goals.

It's worth noting, however, the majority of that difference occurred last season, when the eventual champions scored 23 more times than they were expected to. They struck an incredible amount of low quality chances with Willian, Eden Hazard, Diego Costa and Pedro all having an xG difference of three or more. Gary Cahill also chipped in with six goals despite having an xG of 3.10.

Liverpool are next on the list having scored 24.67 more goals than they should have. Philippe Coutinho, Roberto Firmino, Sadio Mané and Mohamed Salah are the main culprits for their tally which shows those claiming the Reds are wasteful are wide of the mark.

All four have scored low quality chances for Jürgen Klopp's men on a regular basis.

Tottenham Hotspur are the only other team to outperform their xG by 20 or more goals. Spurs undoubtedly benefit from Christian Eriksen‘s ability to net from distance when looking at this metric, as well as being able to call upon Harry Kane –one of the best finishers in the world.

Everton (19.34), West Ham United (15.58) and Bournemouth (15.50) have all outperformed their xG by more than champions-elect Manchester City. Though perhaps Pep Guardiola's men suffer from the fact they create so many high quality chances combined with the fact they have reliable goal scorers.

Manchester United and Arsenal are the only two top six teams not to outperform their xG by double digits. José Mourinho's men have scored 156 goals since the start of the 2015/16 season with an xG of 151.06. Arsène Wenger's team have netted a total of 193 goals – the second fewest of those in the top six – just a goal behind Chelsea.

Liverpool are next up with 206 goals, despite only having an xG of 181.33, while Spurs finish as runners-up with 208 goals. Manchester City romp to victory having scored 230 goals in 103 matches.

In terms of underperforming their xG, it's Crystal Palace rooted at the bottom, they're currently 14.92 down on their xG tally for this season.

Southampton are also a side in serious need of a goalscorer, falling, on average, three shy of their expected return every season. It's a similar story with Stoke City.

It's in this category that two opinions become fact. First off, Man United really are reliant on David de Gea. The Red Devils have conceded chances worth 104.71 goals but have been breached just 80 times

This, of course, doesn't account for gilt-edged chances being spurned or brilliant goal line clearances, but both of those must be at a premium. There's no dressing it up, the 27-year-old is the reason Mourinho's men have remained in the top six.

The only team close to Man United in terms of overperforming their xGA is Burnley. And 14.05 of their 14.32 total comes from this season alone – the praise being heaped onto Nick Pope is well and truly justified. Sean Dyche's men are holding on to seventh place in the Premier League off the back of a number of inspired goalkeeping performances.

Spurs are the only other side to outperform their xGA by more than one. Mauricio Pochettino's men come in with a total of 8.5, although that would have been closer to ten if Spurs hadn't underperformed this season. They've conceded 1.38 more goals than expected which is why questions are being asked of Hugo Lloris. 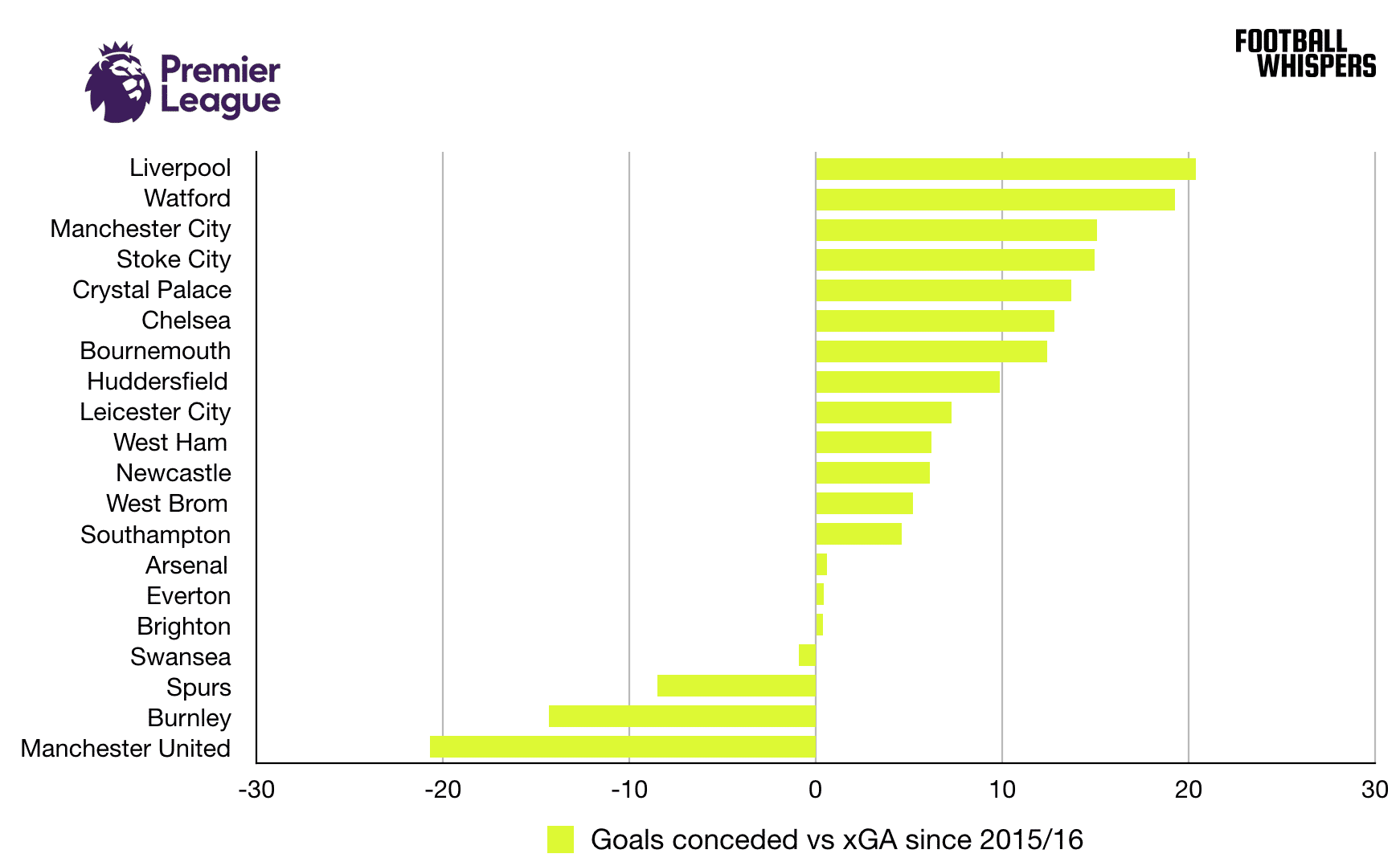 It's the opposite end of the table, meanwhile, where the second opinion is proved as fact. Liverpool have conceded 20.37 more goals than their xGA – claims Simon Mignolet isn't up to scratch are more than justified based on this alone.

Granted, Loris Karius has played 19 top flight matches during this time, but the xGA for the nine games he's featured in this season is 7.03 and he's in fact conceded eight.

It's a small sample but given he's played in matches against Man City, Arsenal and Spurs it's not a bad return at all.

It's not right to extrapolate but for context that's an xGA for the season of 29.64 with a goals conceded total of 33.44.

The Reds haven't conceded south of 40 in the league since the 2009/10 campaign and it's no surprise Alisson is a top transfer target for Liverpool.

Slightly behind Liverpool are Watford. Though not the best defensively, they've conceded a high number of low quality chances over the past two seasons, with 79 per cent of that tally coming in the campaign Walter Mazzarri was at the helm. Was it bad luck or did the Italian put his faith in the wrong players?

Man City are surprisingly high up on this list, conceding 15.09 more than their total xGA. The damage to this tally was done last season when they shipped close to ten more goals than they were expected to.

This term, with Ederson between the sticks, City have conceded just the 2.19 goals more than expected, a figure Guardiola will be content with.

Stoke City, Crystal Palace, Chelsea and Bournemouth have all conceded ten or more goals over their xGA. Chelsea's inclusion in this what catches the eye; is Real Madrid transfer target  Thibaut Courtois as good as people make out?

Leicester City come in with a score of 7.28 above their xGA, an eye-opening figure considering they outperformed that stat by 9.02 during the season they won the title.

It's safe to say that xG and xGA can be used over a large sample size to help add depth to everyday opinions.

Clubs will no doubt be using this sort of data, along with much more detailed information, to help them decide where and what needs improving.