Poland got a bye in their last step of World Cup qualification. Nobody had any complaints about that given it was supposed to be a tie vs Russia. Now though, they'll have to earn their corn. Can they get the win? Find out with our Poland vs Sweden match preview with free tips, predictions and odds mentioned along the way.

Poland picked up some speed after their disappointing campaign in the European Championships; they had no losses in six games after that, with five wins and a draw. However, Poland have not done too well recently; they have no wins in their last two games, including a loss at home to Hungary. In like manner, Sweden have not been enjoying their best form lately; they have three wins and two losses in their last five games. It's fair to point out that Sweden have had Poland's number in the past; they've actually won all of their last five encounters with Poland, including their Euro 2020 group game last year. With this in mind, we believe that Sweden will not lose this match.

Both sides will be amongst the goals

Here are the key stats & form guide for Poland vs Sweden

Poland vs Sweden: Let's look at the predicted lineups

Games don't come much bigger than this with a place at Qatar 2022 at stake. Poland were awarded a bye in the last stage as they were due to face Russia whilst Sweden beat Czech Republic after extra time. Will that extra 30 minutes take it's toll or will the momentum of having won carry them through against a side that haven't had a competitive game for a little while?

Poland finished second in Group I, six points behind group leaders England; they were scheduled to play against Russia in the playoff semi-final, but that game was cancelled due to Russia's ban. The Poles will have to get past Sweden in order to get to the FIFA World Cup; they'll fancy their chances of getting the win.

Sweden were group B leaders with just two matches to go; unfortunately, they lost both games, losing the top spot to Spain. The Swedes had to knock out Czech Republic in extra time to advance to this playoff final; they'll hope for similar results as they take on Poland.

A quickfire FAQ on Poland vs Sweden 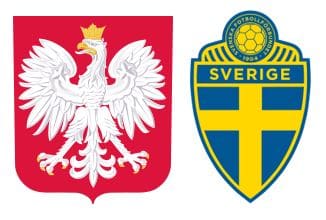