The upcoming round of La Liga brings us a few interesting matchups, including the Valencia vs Osasuna duel. So, check our preview of this game to learn more about it and to get some betting predictions.

Our latest Valencia vs Osasuna betting picks and tips

If you are looking for free La Liga betting tips, including our top picks for Valencia vs Osasuna, you've come to the right place:

While the two teams are separated by just one point in the standings, Valencia has been in better form lately since they are without a loss in the last six games in La Liga.

In addition to this, Valencia already beat Osasuna in the first half of the season pretty convincingly and we can see something like that happening on Saturday too.

Three of the previous five h2h duels between Valencia and Osasuna have gone over 2.5 total goals and we expect the same to happen in their next meeting.

The best odds and useful stats for Valencia vs Osasuna

If you wish to bet on the top Valencia vs Osasuna odds, check our list of odds taken from the best UK betting websites:

With the teams in similar positions in the standings, this should be an exciting game. So, let's check them both out in more detail:

With three wins and three losses in the last six games in La Liga, Valencia is in good form right now. The team has gotten into good form at the right time since they also have Copa del Rey final next week, which is probably the biggest game for The Bats in recent years. Meanwhile, the team is ninth in the league, but they could go up to the seventh place if they can keep their form going.

Mouctar Diakhaby is back in the team following a suspension, while the team remains without Toni Lato and Maxi Gomez who are still sidelined with injuries.

At the moment, the team from Pamplona is sitting in the tenth spot in La Liga standings, which is a basically where they were expected to be at the start of the season. However, Osasuna is just five points behind Villarreal in the seventh place, so we could see them rise up the standings in the remainder of the season.

Meanwhile, Osasuna is still without Unai Garcia, Kike, Juan Cruz, and Jesus Areso, who are all injured, but the rest of the team is available for selection. 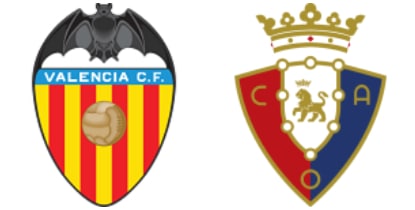