The last game of La Liga scheduled for Saturday is the Osasuna vs Sevilla duel, so here are some thoughts about that match and a few free betting predictions.

Our top Osasuna vs Sevilla betting tips and picks

If you want to check out reliable La Liga betting predictions, including our top tips for Osasuna vs Sevilla, you can find them right here:

Although Sevilla drew in their last two games in La Liga, they managed to get closer to Real Madrid in the process and now they are just four points away from the top of the league.

Meanwhile, Osasuna is sitting in the middle of the standings at the moment and they have been inconsistent lately. Given the fact that Sevilla is in title race, we can see them winning this game, especially since they also won the last four h2h duels against Osasuna.

Only one of the last five h2h meetings between Osasuna and Sevilla has gone over 2.5 total goals, so we don't expect that to happen in this game either.

The latest odds, stats, and more for Osasuna vs Sevilla

If you want to place a bet on the highest Osasuna vs Sevilla odds, check the odds we chose from some of the best UK betting sites:

Recent form, news, and predicted lineups for Osasuna vs Sevilla

While the guests are favourites in this game, we can see this being an exciting match. With that in mind, let's take a closer look at both teams right now:

With two wins, two draws, and two losses in the last six games in the league, Osasuna has clearly been pretty inconsistent. Still, the team is doing ok this season since they are currently in the middle of the standings and not that far away from top half of the table. Of course, they are also not that far away from potential relegation issues, but many things have to go wrong for Osasuna for that to happen.

The team will be without Nacho Vidal in this game due to a suspension, while Lucas Torro, Oier, Jesus Areso, and Aridane Hernandez are out with injuries.

It's been a great season so far for Sevilla since the team is chasing Real Madrid in the title race and they are currently just four points behind them. Sevilla has three wins and three draws in the last six games, so they are in great form at the moment.

There have been some changes this January in Sevilla, but one of their newcomers Corona will miss the game with an injury. Jesus Navas, Alejandro Gomez, Suso, Thomas Delaney, and Erik Lamela are also on the team's injury list. That being said, we should see Anthony Martial make his debut for the team. 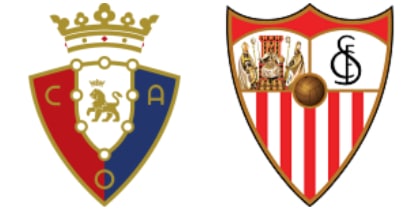