The Espanyol vs Osasuna duel in the upcoming round of La Liga won't affect the standings much, but we could still see an exciting duel. So, here's a preview of the match and some free betting tips just for you.

Our favourite Espanyol vs Osasuna betting predictions and tips

If you are struggling to decide on the best bet for Espanyol vs Osasuna, check our top betting tips for this duel:

Espanyol and Osasuna to Draw

With both teams being pretty much set in their mid-table positions, they won't really have a huge motive for this game. So, this match will feel more like a friendly game.

With that in mind, we can see the game ending in a friendly split of points, especially since we haven't seen a draw in the last five h2h duels between these two teams and we feel like it's time.

The last three head-to-head meetings between Espanyol and Osasuna have gone under 2.5 total goals and we can see that being the case once again in their upcoming matchup.

The best odds, stats, and more for Espanyol vs Osasuna

If you are looking for the top La Liga betting odds, including the odds for Espanyol vs Osasuna, you've come to the right place:

The guests have been in better form recently, but this should be a very close game. So, let's check both teams out in more detail:

Even though they lost four of their last six games in La Liga, Espanyol is pretty much safe from relegation at this point of the season. Right now, they are eight points ahead of the first team in the relegation zone, so it would take a real miracle for them to end up back in La Liga 2 after one season in the top flight.

The team will likely be without Oscar Gil and Keidi Bare once again, but the rest of the players are in good shape and ready for the upcoming duel with Osasuna.

With three wins, one draw, and two losses in the last six games in the league, Osasuna is in solid form at the moment. Overall, this has been a good season for them since they are sitting in the top half of the standings, in the ninth place. However, they are unlikely to move much from there, so the rest of the season will not be so interesting for their fans, but it will be free of any stress.

When it comes to team news, Osasuna will likely remain without Jesus Areso through injury, but the team has no other issues at the moment.

Common questions and answers for Espanyol vs Osasuna 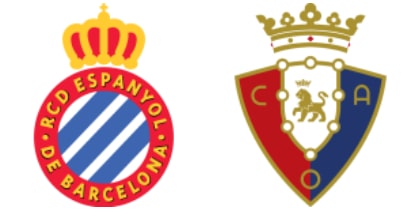