The Osasuna vs Celta Vigo duel is probably the closest matchup in the second round of La Liga, so let's take a closer look at this match and what we can expect from it.

Our top betting predictions for Osasuna vs Celta Vigo

We have a lot of La Liga predictions to offer to you, so check some of our free betting tips for the Osasuna vs Celta Vigo game if you need some help:

None of the previous five duels between Osasuna and Celta has been won by the away team, but we expect this tradition to break this time. We have a feeling that Celta can get a win in this match since Osasuna didn't impress us much in their scoreless draw at home against Espanyol in the first round, so our prediction is for Celta Vigo to win this game.

Three of the last five head-to-head meetings between Osasuna and Celta Vigo have gone over 2.5 total goals, so we expect to see the same in their upcoming match. Celta Vigo has also gone over 2.5 total goals in the 2-1 loss to Atletico Madrid in their first game of the season. On the other hand, Osasuna played a scoreless match in the first round, but we still expect to see some goals here.

Iago Aspas to Score at Any Time

The Spanish striker was one of the brightest things last season for Celta Vigo since he scored 14 goals in the league to help the team to a top-half finish in the standings. Aspas also scored in the first round against Atletico Madrid and he scored three goals against Osasuna in eight appearances, which is not a bad record at all.

Top stats and odds for Osasuna vs Celta Vigo

If you are looking for the best odds for Osasuna vs Celta Vigo, take a look at our list of odds from the top UK betting websites:

Osasuna vs Celta Vigo preview: Who will get the first win of the season?

The previous season was a solid one for Osasuna since they finished the league in the eleventh place, which is pretty much the best they could achieve. The team is hoping to build on that season in the new addition of La Liga, but their first match was an uninspiring draw at home against Espanyol. Cote, Ibanez, and Hernandez are currently injured and they will miss the second round of the league.

After a very good season in which they were positioned in the 8th place in the table at the end and barely missed on European competitions, Celta Vigo is probably hoping to make a step forward and improve on the last season. However, they started the new season with a loss at home, but that loss came against the reigning champions Atletico Madrid. Baeza and Mallo will miss the upcoming match due to injuries. 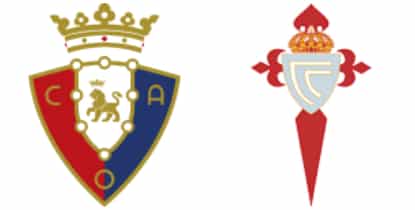