Like most of the matches of this round of La Liga, the Athletic Bilbao vs Osasuna duel is also scheduled for Sunday, May 15th, and we can see this being an exciting game. So, let's take a closer look at it and some of our free betting tips.

If you can't decide on the best bet for the Athletic Bilbao vs Osasuna duel, check our top betting tips for this game:

While the two teams are fairly close in the standings, Athletic Bilbao still has a chance to secure a spot in one of European competitions, while Osasuna will have to bet happy with a place in the middle of the standings.

With that in mind, we expect Athletic Bilbao to come into the game more motivated and get the win. After all, they are playing at home and they already beat Osasuna once this season, so we don't see why they can't do it again.

We were surrprised to see that only two of the last five h2h meetings between Athletic Bilbao and Osasuna went under 2.5 total goals, but we still expect this game to go under.

The latest odds and key figures for Athletic Bilbao vs Osasuna

If you want to bet on the best Athletic Bilbao vs Osasuna odds, check our selection of odds from the top UK bookies:

Form and predicted lineups for Athletic Bilbao vs Osasuna

While the home team is the clear favourite in the game, this can be an interesting matchup. So, here's a closer look at both teams:

With two wins, two draws, and two losses in the last six games in La Liga, Athletic Bilbao is far from being in their best form. Despite this, they are still in the race for the seventh place in the standings, which would take them to Europa Conference League. However, Villarreal is four points ahead of them, so their chances of catching them in the last two matches are not that high.

Meanwhile, Athletic Bilbao will be without Mike Vesga, who got sent off in the last round and has to serve a suspension. Also, Unai Nunez, Ohain Sancet, Yeray Alvarez, Ander Capa and Oscar de Marcos are out with injuries.

The team from Pamplona has just one loss in the last six games, along with two wins and three draws. So, they are doing well lately and it's safe to say that Osasuna had a good season overall since they are bound for a top-half finish. While they are not competing for a spot in Europe, that is still a good result for the team.

On top of this, Osasuna is currently free of any squad issues since they have no injuries and no suspensions to consider ahead of the final two games of the season.

The usual questions for Athletic Bilbao vs Osasuna 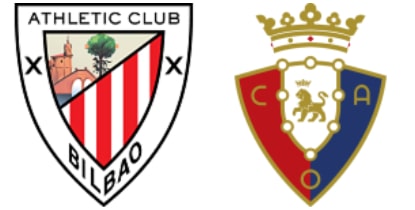