Arsenal were supposed to be in League Cup semi-final action this midweek but that got called off. Is that bad news for Nottingham Forest with the squad now completely fresh? Find out with our Nottingham Forest vs Arsenal match preview with free tips, predictions and odds mentioned along the way.

Last time Arsenal visited the City Ground in a cup game they came away with their tail between their legs off the back of a defeat; we do not see that happening this time. Arsenal are in good form with five wins from their last six and even that defeat came as they impressed against Man City. Nottingham Forest meanwhile come into this match off the back of two straight defeats. They had been on a nine game unbeaten stretch before that but with a lot of draws. Given that even Arsenal's second string are a step up in quality from what they've been facing in those weeks this will be a tough ask.

Arsenal to keep a clean sheet

Our next prediction for this match is that Arsenal will keep a clean sheet. Nottingham Forest aren't exactly free scoring in the second tier having blanked in each of their last two and in four of their past seven games. When you then consider that a) Arsenal will dominate possession in this match and b) that they've kept three clean sheets in their last six then the prospect of the home side failing to find the net looks very real – unfortunately for the home support.

Check out the key stats & form for Nottingham Forest vs Arsenal

Nottingham Forest vs Arsenal has been an elite clash over the years but it's not anymore. Despite that, the Gunners haven't had it all their own way in recent encounters and they'll know they need to do a professional job to leave with a win.

Nottingham Forest will be desperate to give their fans a repeat of that glorious game back in 2018 where Eric Lichaj bagged a brace in a 4-2 win. In order to have any chance of that, they'll need to go full strength.

Arsenal have become a cup team over the last decade or more and, this year, would appear to be playing out the same way. That is bad news for Nottingham Forest because the lineup will see changes but will still be strong.

A brief FAQ ahead of Nottingham Forest vs Arsenal 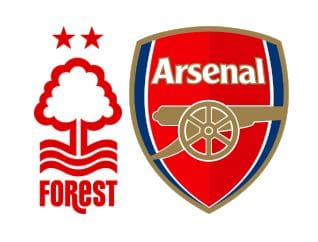