Following their midweek victory over Everton in the Premier League, Burnley are back in contention to stay up this season and will be looking to make it back-to-back victories when they face Norwich at Carrow Road. The hosts are in poor form and look destined for the drop but could throw a spanner in the works for Burnley this weekend.

Burnley have picked up three wins from their last four league meetings with Norwich and we're backing Dyche's men to secure all 3pts this weekend as well. Norwich have lost five of their last six matches in all competitions and while Burnley have only won one of their last six league games, that victory arrived in midweek against fellow strugglers Everton and should provide a platform for Burnley to build upon.

Both teams have scored in four of the last seven meetings between these two clubs in all competitions, so you can start to see just why we're backing BTTS on Sunday. Four of Norwich's last five matches have ended with both teams scoring, while Burnley's last game against Everton ended in a 3-2 victory and we fully expected both defences to concede goals this weekend as well.

Norwich made the trip to out of form Brighton last weekend where the two sides played out a 0-0 draw that won't live long in the memory. That result took Norwich onto 18pts for the campaign but the Canaries remain 7pts adrift of safety with just 8-games left to play. Relegation might not have been confirmed just yet but there is little evidence out there to suggest that Norwich are capable of pulling off the great escape.

Burnley face Everton in a must-win game on Wednesday night, and that's just what Dyche's men did. Collins put the hosts 1-0 up after 12-minutes but Everton converted two penalties to lead 2-1 at the break. Dyche lifted his players during the interval and just before the hour mark Rodriguez got Burnley back onto level terms. There was always going to be one more goal in this game and in fairness, it could have gone either way. With just 5-minutes of the 90 remaining, Cornet fired home a third goal for Burnley to take them to within a point of the Toffees.

Burnley: Mee, Pieters and Gudmundsson are the main injury concerns for Burnley. 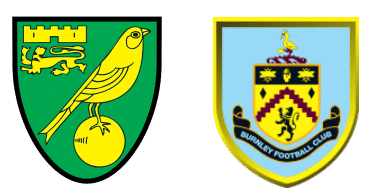