Norrkoping and Sirius meet to battle it out for three points in the Allsvenskan on Sunday, July 3rd. Two clubs with similar records face off at the PlatinumCars Arena. Read our free predictions and find the latest odds for the fixture below in our detailed match preview.

Just one place and one point separate 10th-placed Norrkoping and Sirius in 11th ahead of their tussle on Sunday. Read our top three predictions for this weekend’s fixture below.

Norrkoping have been getting into the swing of things from an attacking perspective at home of late and their last two games at the PlatinumCars Arena featured ten goals. Four Sirius’ last five assignments on the road meanwhile produced over 2.5 goals and the teams’ shared front-foot style of play should lead to more excitement on Sunday. With that in mind, a stake on over 2.5 goals appeals again at the prices available.

When Norrkoping and Sirius last locked horns in the Allsvenskan in September last year, the net rattled a notable six times (4-2) and that was the third time in four encounters between the clubs where both teams got their name in lights. BTTS has also been a winning bet in three of Norrkoping’s last four and each of Sirius’ last three fixtures in the Swedish top flight and bettors could find success by sticking to the same market on Sunday.

Top Betting Odds and Stats for Norrkoping vs Sirius

View our list of the best stats for Sunday’s fixture below alongside a tool to help you choose the best odds.

You can read all of the latest injury updates and team news for Sunday’s Allsvenskan clash between Norrkoping and Sirius below.

Midfielder Kristoffer Khazeni is ill and is rated as doubtful ahead of Sunday's game, though the rest of Norrkoping's squad is fit and firing After a three-game stretch without a win, Head Coach Rikard Norling will be desperate for his team to rediscover their rhythm this weekend.

Sirisu could without ill trio Karl Larsson, Yukiya Sugita and Mustafa Zeidan this weekend. Augsut Ahlin is also set for a lengthy spell on the sidelines with injury, though defender Patrick Nwadike is on the road to recovery and could make the matchday squad. 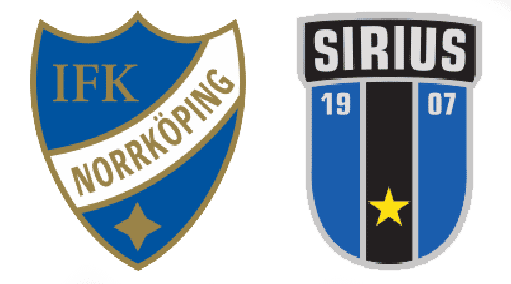 Norrkoping beat Sirius 4-2 when the teams last met at the start of last season.

Norrkoping have been priced as odds on favourites to beat Sirius this weekend.