Monaco and Nice go head to head in a mid-week fixture set for 20th April 2022. The hosts are looking to break into top five while Nice is hoping to go third on the Ligue 1 table. This is, therefore, one of the games to watch this week if you have been keenly following Ligue 1.

A tough duel is expected between Monaco and Nice this week. It is a fixture that will change the equation in top-four race. We have looked at both teams in details, especially their current form to come up with the best two predictions as follows:

We have settled on Monaco to win this duel. The hosts are having a strong resurgence after winning all their last four Ligue 1 games. While the hosts kept only one clean sheet in that run, it is safe to say Monaco’s home support will be relentless and so is the desire to break into top five. The hosts are only a point away from being in the best-five fold.  Monaco’s chances should be boosted by Nice’s recent away performances. Nice is winless in the last five away games during which they recorded two draws and three losses.

While home victory is the most probable outcome in this game, Nice is in the race to finish in tip five. The visitors are currently ranked fourth, a position we believe they will fight to keep. So, backing home win is okay but we don’t see many goals getting scored in a game we expected to be tense.

Place your bet on selected bookmakers in the tables below. Also, check out the stats for each team, including H2H below placing your bet.

Monaco will be without three main players in this game namely Martins, Maripan and Diatta. On the other hand, Nice have two players out for this game. They include Dante who is serving suspension and Claude who is nursing an ankle injury.

In the last 20 matchups, Monaco was the better team, winning 12, drawing two and losing five times to Nice. And while the reverse game ended 2-2, Monaco has not lost to Nice in the last four encounters across all competitions. Moreover, Monaco lost only once to Nice in the last six meetings, a record that together with home advantage in this game, points at a high probability of home victory on matchday.

Here is how we expect these teams to lineup against each other on matchday: 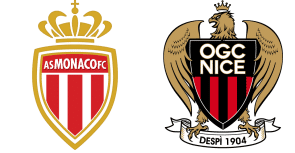 Who is the current manager for Monaco?

Philippe Clement is the current head coach for Monaco.

Who is the head coach for Nice?

How did both teams perform in the last meeting?