Borussia Monchengladbach take on Mainz at BORUSSIA-PARK in the Bundesliga on Sunday, September 4th. Gladbach are targeting their third home win on the trot this weekend. Read our free predictions and find the latest odds for the fixture below in our detailed match preview.

Mainz are unbeaten in three previous meetings with Borussia Monchengladbach ahead of the teams’ tussle on Sunday. Read our top predictions for this weekend’s fixture below.

Three of the five matches involving Gladbach in league and cup have produced over 2.5 goals this season, though that really should have been four after they allowed Bayern Munich to muster an incredible 20 shots on target in their 1-1 draw with the champions last week. Mainz meanwhile, have seen the net ripple at least three times in all but one of their four Bundesliga assignments since the summer and that pattern could continue on Sunday. Over 2.5 goals has landed in four of the last six meetings between these clubs and we’re tipping this weekend’s clash to follow that trend.

Borussia Monchengladbach and Mainz have kept just two clean sheets between them in eight Bundesliga matches combined this term and neither defence looks particularly reliable in its current guise. It’s also worth noting that BTTS has been a winning bet in 100% of the last six head-to-heads between the clubs and a stake on the same market is recommended at the prices on offer on Sunday.

Top Betting Odds and Stats for Borussia Monchengladbach vs Mainz

View our list of the best stats for Sunday’s fixture below alongside a tool to help you choose the juiciest odds.

Read all of the latest injury updates and team news for Sunday’s Bundesliga showdown between Borussia Monchengladbach and Mainz below.

Stefan Lainer and Conor Noss are both out injured for Gladbach at present. In better news, Alassane Plea should be fit enough to feature after a minor knock, while Torben Musel should recover from a bruised knee. Ramy Bensebaini is a doubt with the flu.

Defender Danny da Cost has a groin strain and will miss Sunday's game. Marcus Ingvartsen meanwhile, has a ligament issue and won't be back in action until October. Mainz were swatted aside 3-0 at home by Bayer Leverkusen in their last fixture. 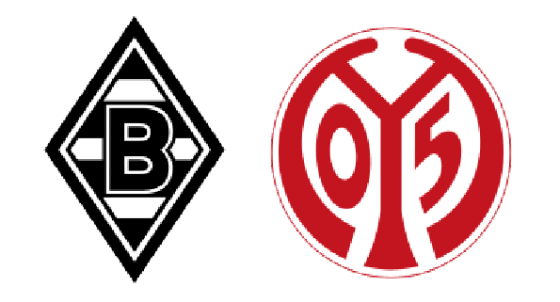 Borussia Monchengladbach and Mainz drew 1-1 when they last met in April.

The bookmakers have priced Borussia Monchengladbach as favourites to beat Mainz on Sunday.