Monaco is on a five-match winning streak ahead of this trip to Saint-Etienne. Will the Monegasques keep the winning run going against Saint-Etienne, a team that is fighting to avoid relegation? Find out more in this post; include a detailed preview of this game, free tips and the best odds.

While Saint-Etienne is fighting to avoid getting relegated, AS Monaco is fighting to keep their place in top five. It is a battle of all sorts in this fixture and so, the question is which team has the winning chance in this duel? Here are our best two predictions for the Ligue 1 match.

A five-match winning streak and hunger for a place in the top five should get Monaco fired up in this duel. While both teams have a good scoring run in their last five games, Monaco is our pick to bag all points at-full. They risk losing the fifth spot to Nice, which is only two points away in sixth place.

Etienne was the first to score in the reverse game away from home. They have been in fine scoring form, despite defensive problems that have condemned them to relegation fight. We expect both teams to score in this game.

We have the latest stats, H2H details and the best odds for Saint-Etienne vs Monaco Ligue 1 match in the tables below.

Monaco looks to extend their winning run to six games in this trip to Saint-Etienne. On the other hand, Saint-Etienne continues their fight against relegation even though it could prove difficult against the in-form Monaco.

Our first expectation in this game is that there will be at least three goals at full-time. Looking at the last three encounters, every game within that run had four goals, albeit, Etienne failed to score in one of them.

We also expect both sides to be on the score sheet. The visitors have scored at least two goals in four of their last five games and netted in all the last six matches. While Etienne will face a difficult opponent in this game, the hosts have been scoring goals lately. Etienne at least twice in each of their last four games and was on the score sheet in the last five games. 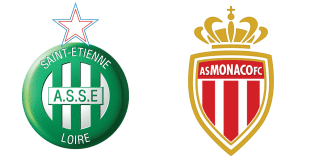 Who is expected to referee Saint-Etienne vs Monaco Ligue 1 game?

Bastien Dechey will be in charge of the game.

What was the outcome in the reverse meeting?

Monaco won it 3-1 in a match where Saint-Etienne had a red card in the 33rd minute, leaking all three goals after Etienne Green was sent off for fouling the last man.