Derby suffered a brutal blow in the week as they threw a lead away against relegation rival Barnsley. Can Wayne Rooney's men bounce back here? Find out with our Millwall vs Derby match preview with free tips, predictions and odds mentioned along the way.

Millwall vs Derby: Our top tips

Lions too strong for the Rams

Everyone was writing Derby off at the start of the season and whilst they've been competitive, it does look like those pre-season views are going to age pretty well. They've drawn their fair share of games but can only offer up two wins in their last 10; their loss to Barnsley in the week will have hurt too. Millwall, however, have won three of their last five matches with their last two home games both ending in victory. In head to head terms, Millwall have on three of the last five meetings

Derby have surprised us in the last couple of games having served up a total of six goals in their last two matches; that said, their season long goals per game average is the lowest in the Championship by some distance sitting at 1.7. Millwall are only sat on 2.0 goals per game though and the fact their last five games have served up just 10 show lower scoring matches have been a consistent theme; three of their last five games have ended under 2.5 with four of the last five head to head meetings coming up short of the threshold too.

Derby will fail to score

We'd be kidding if we painted Derby as a fluid attacking machine; they've only scored 12 goals all season, which is a shoddy return from 16 matches. Millwall average one goal against per game but after recording a clean sheet against Reading on Tuesday, they'll be confident of keeping out what is a rather lacklustre Derby side.

Find the best odds for Millwall vs Derby

Derby might have only missed out on three points in midweek as they lost to Barnsley but there is the possibility it will cost them a lot more than that in spirit terms; it was a bitter blow to their survival aspirations. They'll be facing Millwall without the injured duo of Krystian Bielik and Kornell McDonald. Colin Kazim-Richards has been back in the squad for the last couple of weeks but without getting loads of time on the grass; he grabbed eight goals for them last season so could be afforded more game time. For Millwall, they've been doing okay but with consistency perhaps a problem that will stop them achieving anything of note. They do have pretty much a full squad to choose from for this match; George Evans is the exception.

FAQ on Millwall vs Derby 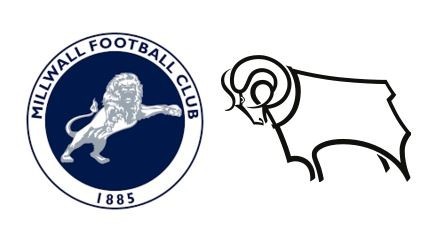