The following article covers all the necessary information required to make a bet on the EFL Championship Round of 40 match between Middlesbrough and Watford. If you want to bet on another game of that league, here you can find our Championship betting page.

Here is our team of experts take on this match-up, done after a thorough statistical analysis:

The odds are true at the time of writing but may change without notice. Check your betslip carefully before placing your final bet. Our recommended bookmaker for this match is Ladbrokes.

The Hornets are keeping up the impressive run they have. 9 wins and just a single loss for Watford in its last 10 matches has earned the club the 2nd league spot. The Head-to-head statistics lean heavily in favor of Watford as well. Gino Pozzo’s club has won 6 and drawn 3 others in the last direct meetings between the two leaving Boro with only a single win in 10.

The last 5 matches between the two, have had very few goals in total, and only once have both teams scored. Furthermore, Watford is playing so well they will have no problem keeping a clean sheet. Furthermore, in their last 2 games, Watford has manged to keep a clean sheet.

As we mentioned, these two clubs have failed to score too many goals in their most recent meetings. Paired with the fact that this is a game from the EFL Championship – a league with not as many goals as others, the Under 2.5 bet here seems decent. We also suggest that this congested schedule will affect the fatigue of the teams negatively. Both teams played on 04.02 amd only 3 days later, they have a game week once again.

Middlesbrough vs Watford: The most important statistics

In this part of the article, you can visualize the clubs' latest results and check for the best odds.

Middlesbrough vs Watford: Battle for promotion

With the visitors' most recent win over Sheffield Wednesday and Swansea's 3rd loss in a row, it is now pretty much clear that the Hornets will be teaming up with Norwich for the direct Premier League promotion. However, Watford shouldn't slow down the pace, as nothing is decided until the end. The Hornets' fan favorite Troy Deeney is expected to miss the game.

Boro wouldn’t have it easier missing two important parts of its defense – Anfernee Dijksteel and Dael Fry are injured and will miss the matchup. The head-to-head statistics are what looks most concerning. Since 2021, Middlesbrough has managed just a single win over Watford, and it seems like they aren't getting their second in this game. 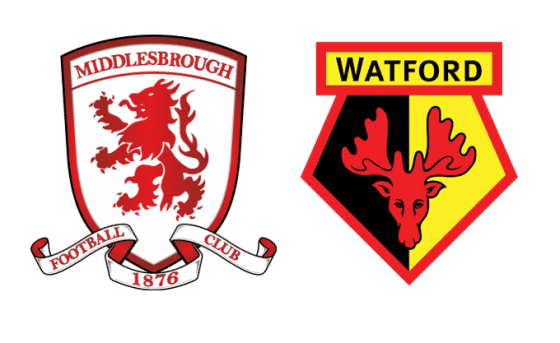