Middlesbrough could really do with winning this match if they're serious about making the playoffs. Can they get the job done? Find out with our Swansea vs Middlesbrough match preview with free tips, predictions and odds mentioned along the way.

Middlesbrough are running out of games to get back in the playoff picture but we don't see it happening here; we fancy Swansea to win. The Swans are in good form of late having gone seven games unbeaten. Middlesbrough meanwhile have had a real drop off in form; they've lost three of their last four matches and drawn the other one. On top of that, Boro's record in Wales is poor. In their last six visits to Swansea they have avoided defeat just once – that was a draw back in 2017.

Someone will blank in front of goal

Our next tip for this game is that we'll see at least one side fail to find the net. In all likelihood we expect it will be Middlesbrough that fail to score given they've blanked in each of their last four matches but it's also important to note that they have also kept a couple of clean sheets in that period. Swansea's games have seen comparably more goals but even then two of their last five have involved someone failing to score. The reverse fixture, which took place in December, saw just the solitary goal too.

Here are the key stats & form guide for Swansea vs Middlesbrough

Swansea vs Middlesbrough: Let's look at the predicted lineups

Middlesbrough are vying for a playoff spot right now whilst Swansea are looking to break into the top half. Given the one-sided nature of the head to head record, you have to say Boro have their work cut out.

Swansea have really found some form of late and sit second in the five game form table. It means little for this season with their best hope being a top half finish but if they can see out the campaign with a couple more wins – especially against the likes of Boro – then the mood around the Swansea.com stadium will be buzzing ahead of the new season.

If you purely look at the league table then Middlesbrough are arguably in pole position to take sixth place owing to games in hand. If you factor in form, however, then things look a tad bleak with Boro 20th in the five game form table. They need to snap that poor run soon with games running out fast.

A quickfire FAQ on Swansea vs Middlesbrough 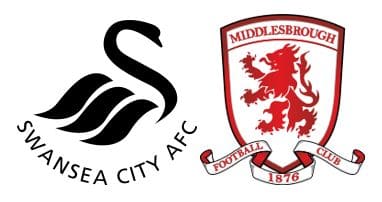