Preston's tilt at the top six lost pace long ago but Middlesbrough find themselves in a three way, final day battle for a playoff place. Only a win gives them a chance, will they take maximum points? Find out with our Preston vs Middlesbrough match preview with free tips, predictions and odds mentioned along the way.

Middlesbrough need results elsewhere to go their way to make the top six but that doesn't alter their task, which is to win. We think they'll do that. Preston hardly arrive in amazing form having lost two of their last three matches whilst Boro come into this game with back to back victories to their name and just one defeat in five. When you then factor in the emotional input of the game and that Middlesbrough have lost on just one of their last five visits to Deepdale and things look good for Boro.

Expect to see some goals

An over 2.5 goals tip slightly bucks the trend of Middlesbrough's recent form as they've only passed that mark in one of their last five games but Preston's record of having seen four of their last five go north of 2.5 gives this a real chance of coming in. Two of the last three head to head games have gone over 2.5 total goals as well so this fixture does have a history of goals.

Here are the key stats & form guide for Preston vs Middlesbrough

Preston vs Middlesbrough: Let's look at the predicted lineups

Preston might be disappointed that their own playoff hopes fell away but with their last game of the season they could deliver a bitter and knockout blow to Middlesbrough.

Preston have long been heading for a mid table finish and regardless of how this game plays out that's exactly what they'll get. Being at home though, they'll want to head off to the beach with a positive display and result in the bank.

Middlesbrough will only have themselves to blame if they ultimately miss out on the top six. For a long time in this second half of the season they've looked bankers for the top six but they've seemingly choked. A couple of good results have them back in with a chance but they have it all do.

A quickfire FAQ on Preston vs Middlesbrough 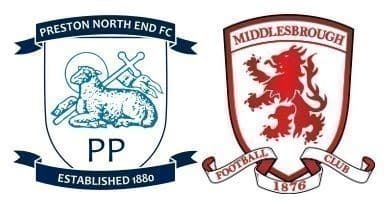