Middlesbrough are just outside the playoff places now but a win here could change all of that. Will they grab maximum points? Find out with our Middlesbrough vs Hull match preview with free tips, predictions and odds mentioned along the way.

Middlesbrough to chalk up three points

Middlesbrough might have lost their last two home games but you have to consider the opposition (Chelsea and Fulham) and it's undeniable that Hull aren't close to either of those two. It's also important to dig a little deeper because, prior to those losses, Boro were unbeaten in nine home matches winning eight and needing extra time to see off Tottenham in the cup. Compare that to a Hull side that have won just one of their last five games whilst losing three and it's hard to see a scenario where Middlesbrough don't take maximum points.

Someone is failing to score

Next up we are saying that someone will fail to score in this match. Middlesbrough have not seen both teams score in any of their last five matches. Hull meanwhile have seen just one of their last five matches end with both teams on the scoresheet. To cap this prediction off, the meeting between these two earlier in the season saw Boro fail to score. Three of the last five meetings between the sides played at the Riverside have seen a clean sheet for someone too.

Here are the key stats & form guide for Middlesbrough vs Hull

Middlesbrough vs Hull: Let's look at the predicted lineups

Hull are safe from the threat of relegation and that's a good achievement for them. Now though other teams will be looking at them for a favour as they visit a Middlesbrough side looking to get back in the top six.

Middlesbrough have enjoyed a great cup run this year but they've got a few cup finals coming up now as they look to jump back into the playoffs. They're well positioned to do so but can't afford many slip ups.

Hull looked doomed to relegation not all that long ago but a spark of form sees them well clear of any real danger now. Providing they keep grabbing the odd result between now and May, their fans will head into the summer feeling extremely positive about next year.

A quickfire FAQ on Middlesbrough vs Hull 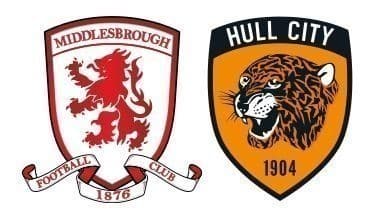