Man Utd could only manage a draw in their last Premier League game away at Burnley and this weekend they welcome a Saints side that secured an impressive 3-2 win at the Tottenham Hotspur Stadium in midweek.

We're backing both teams to score this weekend as it's rare for Man Utd to fail to find the back of the net in front of their own fans and Southampton arrive having just put three past Spurs in their own backyard. Both teams have scored in four of Man Utd's last five outings in league and cup, while each of Southampton's last six fixtures have produced goals ends of the pitch.

At least three goals have been scored in five of the last seven head-to-heads between these two clubs, which includes that famous 9-0 win for Man Utd almost a year ago to this very day. Southampton's recent matches have been full of goals and no clean sheets with five of their last six fixtures producing at least three goals and not a single clean sheet for either them or their opponents.

All you need to know ahead of Man Utd vs Southampton

Man Utd looking to bounce back with a win this weekend

Man Utd benched Ronaldo for the trip to Burnley in midweek where a goal from Pogba opened the scoring after just 18-minutes. Man Utd led at halftime but Burnley equalised through Rodriguez just 2-minutes after the restart. The visitors brought Ronaldo  Lingard and Elanga on in an attempt to retake the lead but the game ended all square. Man Utd now sit 5th in the table a point behind West ham with a game in hand, so there is still an excellent chance of the Red Devils finishing in the Champions League places this season.

Southampton went behind away at Spurs through an own goal from Debnarek in the 18th-minute but responded well and were back on level terms just 5-minutes later via Broja. In the second half, Spurs took the game to the Saints and went back in front through Son in the 70th-minute but 10-minutes later Elyounoussi equalised and the game appeared to be heading for a draw. However, Southampton created another great chance which Adams scored to put the visitors in front for the first time in the game with just 8-minutes remaining. Southampton held on to secure an excellent victory and sit 10th in the table.

Man Utd: Bailly and Telles are the main concerns for Man Utd this weekend.

Southampton: Tella, Redmond, McCarthy and Lyanco are all doubts ahead of the trip to Old Trafford. 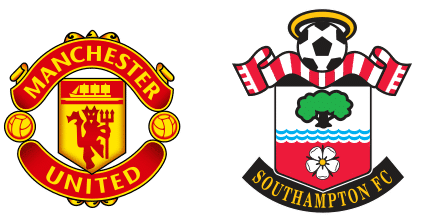