For all the talk of a crisis at Man Utd and the possibility of Solskjaer losing his job, the Red Devils only sit 3pts behind their local rivals Man City in the Premier League table ahead of the Manchester derby this weekend. Both teams really need a win to keep in touch with Chelsea and Liverpool, but a draw would probably be a better result for the home side given the pressure on their manager's shoulders.

Here are our predictions for Man Utd vs Man City.

We're expecting a tight and tense 90-minutes at Old Trafford with under 2.5 goals being scored, or not scored as the case may be. Each of the last five meetings between these two clubs in league and cup have witnessed fewer than three goals scored and three of Man City's last five matches against English clubs have also produced under 2.5 goals.

Going on the theme of a close and competitive match this weekend, we're not backing both teams to score on Saturday. None of the last five encounters in all competitions between these two clubs have produced goals at both ends of the pitch. Both teams have scored in just one of Man Utd's last three outings, while Man City have seen just two of their last five fixtures end with both teams getting on the scoreboard.

Both teams are likely to be very cautious in the first half, particularly the hosts as they head into the match as the underdogs. We're backing the half-time score to be goalless in this game and believe that if there are going to be any goals in this game, they will arrive in the second forty-five when both teams feel more comfortable and start attacking more, leaving spaces in behind.

Man Utd made the trip to the Tottenham Hotspur Stadium last weekend desperate to secure all 3pts and take some of the pressure off Solskjaer's shoulders. Cristiano Ronaldo opened the scoring in the 39th-minute after good work from Bruno Fernandes and Man Utd lead 1-0 at the interval. The visitors controlled the majority of the game and once they went 2-0 up through Cavani in the 64th-minute, there was no way back for Spurs. Rashford added a third goal 4-minutes from time and that result lead to Tottenham sacking their manager.

Man City were the big favourites to beat Crystal Palace at home but an early goal from Zaha seemed to through the hosts off their game. Just before the break, Laporte got himself stupidly sent-off and that gave Man City an even bigger mountain to climb in the second half. City thought they had equalised only for the goal to be ruled out for offside and while they kept on pushing forward, Crystal Palace managed to pinch a second goal to confirm an unlikely victory for the Londoners.

Man Utd: Paul Pogba is suspended while Victor Lindelof and Raphael Varane are slight doubts due to injury.

Man City: Ferran Torres remains sidelined for the visitors and Aymeric Laporte will miss the short trip to Old Trafford due to suspension. 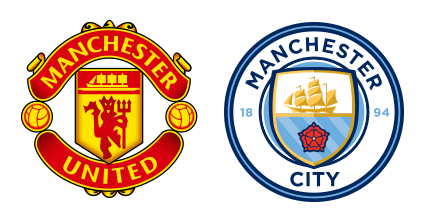