Ralf Rangnick takes charge of his first Premier League game as Man Utd's interim manager and the German couldn't have asked for a much bigger fixture than Arsenal at Old Trafford. These two clubs have one of the most competitive rivalries in the Premier League era and Arsenal boss Mikel Arteta will be looking to keep the Gunner's recent good run against Man Utd going on Thursday night.

We're expecting this game to be very close and competitive throughout with neither side wanting to risk conceding the first goal early on. Under 2.5 goals have been produced in each of the last five league meetings between the pair and Arsenal haven't lost any of those matches. Fewer than three goals have also been scored in three of Man Utd's last four outings, as well as in four of Arsenal's last five fixtures.

Both teams have scored in just one of the last five encounters between Man Utd and Arsenal and we can't see both sides getting on the scoreboard in this game. Only three of United's last six matches in all competitions have produced goals at both ends of the pitch and only one team has scored in each of Arsenal's last five games in league and cup.

No 1st Half Goals

As we are expecting a tight and tense 90-minutes and this is Ralf Rangnick's first game in charge of Man Utd we believe that there won't be any goals in the opening 45-minutes. Conceding goals has been an issue for Man Utd of late and that is something their new German coach will have been working on, while Arsenal are bound to have worked on their defending after they conceded 4-goals at Liverpool recently.

All you need to know ahead of Man Utd vs Arsenal

Man Utd secured a surprise point away at Chelsea last time out in what was Michael Carrick's first and only game in charge of the first team. The first half ended goalless but early in the second forty-five Sancho fired Man Utd in front. That goal might have been enough to beat Chelsea on another day but the hosts were awarded a spot-kick in the 69th-minute which Jporginhop converted to make the final scoreline 1-1.

Arsenal were held at half-time by Newcastle but broke the deadlock through Saka in the 56th-minute. After that, there was no looking back for the Gunners as Martinelli scored a rare goal to make wrap up a 2-0 win for Arteta's men. Arsenal sit 5pts and three places above Man Utd in the league table and will be looking to increase that advantage on Thursday.

Arsenal: Sead Kolasinac and Granit Xhaka remain sidelined through injury and there are doubts over Bukayo Saka for the trip to Manchester. 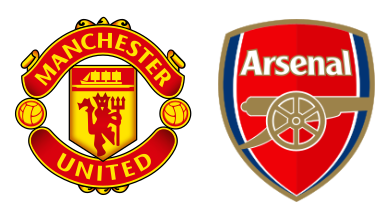