* Betting odds were correct at the time of publication but are subject to change.
The last game to be played on Saturday, October 1st in La Liga is the Mallorca vs Barcelona duel, so check our preview of this game if you are interested in learning more about it.

Our Best Tips and Predictions for Mallorca vs Barcelona

If you are struggling to find the right bet for Mallorca vs Barcelona, check our top betting picks for this duel:

While Mallorca had a solid start of the season and they are currently in the middle of the standings, Barcelona won five of their six games, along with one draw.

So, there's a good reason why the odds on Blaugrana are so low since the team is in great form. With that in mind, we suggest betting on Barcelona to win this game by two or more goals. After all, all five of their wins this season were by at least three goals, so we can see that trend continuing in this match.

Robert Lewandowski to Score at Any Time

The reigning winner of European Golden Shoe for two seasons in a row changed the team this summer, but he didn't change his scoring habits since Lewandowski scored eight goals in the first six games for Barcelona.

In fact, he only failed to score in the first game against Rayo Vallecano, netting at least one goal in each of the remaining five games that Barcelona played in La Liga so far. With that in mind, we feel that betting on Lewandowski to score is a pretty reasonable bet.

Top Odds and Important Stats for Mallorca vs Barcelona

If you are looking for the best La Liga odds, including the odds for Mallorca vs Barcelona, you've come to the right place:

The guests are clearly the favourite, but let's take a closer look at the teams ahead of this game:

With two wins, two draws, and two losses, Mallorca started the new season in La Liga pretty much in the same manner as they ended the last one – inconsistently. That being said, Mallorca is expected to finish somewhere around the middle of the standings and their performances and results so far have been in line with those expectations.

When it comes to team news, Tino Kadewere, Dominik Greif, and Ndiaye Diedhiou are all on Mallorca's injury list at the moment.

The new season started very well for Barcelona since the team has five wins and one draw in La Liga. On top of that, they also have an impressive goal difference of +17 in those six games. However, the team lost to Bayern Munich in Champions League, along with a convincing win over Viktoria Plzen. 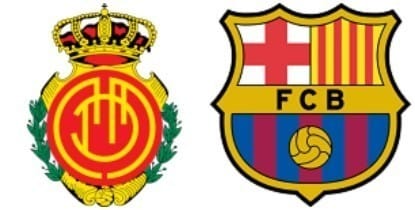