Serbia trounced Luxembourg 4-1 in the previous international window and now face the tough prospect of visiting the Red Lions in their own den. The Eagles did little to impress in their 1-1 draw with Ireland and will be hopeful of a better result at the Stade de Luxembourg.

Here are our predictions for Luxembourg vs Serbia.

Both Luxembourg and Serbia come into this fixture on the back of 1-1 draws in their most recent outings. Prior to that, they were locking horns against each other. It did not end well for the Red Lions as they were on the wrong end of a 4-1 scoreline. As they meeting against on October 09, a similar result is expected as Aleksandar Mitrovic and co. pay them a visit again.

It was Mitrovic who started the rout for Serbia against Luxembourg. The Fulham striker scored twice on that fateful night and will be gunning to repeat his heroics after starting the season in brilliant form. With four goals in his last three outings, the striker is in prolific form and will get help from countryman, Filip Kostic, who was instrumental in bringing down Bayern Munich past weekend. With Serbian attackers enjoying their time on the pitch, expect them to deliver against Luc Holtz's men.

It is easy to make the case for Serbia on getting on the scoreboard. The same cannot be readily said about minnows Luxembourg. While it is difficult to state that they will outscore Serbia, the Red Lions can get on the scoreboard, as they have proved in their last three matches. Holtz ensured that his charges were motivated throughout the 90 minutes last time around and got the consolation goal, and will be hopeful in doing the same this time around.

Luxembourg vs Serbia: Check out the best odds and the latest stats

Match Preview of Luxembourg vs Serbia: Eagles look to soar at the Red Lions expense

Lux Holtz needs a win in familiar surroundings or can kiss their chances of qualification through the promotion route goodbye. The three points will allow them to close the gap on Serbia, who have a five-point lead over them. However, odds are stacked against them as they struggle to score goals regularly, and now their defence has started to give way to rivals as well.

It is the backline that is also giving Dragan Stojkovic headaches. While Serbia are unbeaten in the 2022 FIFA World Cup qualifiers, they have shipped in seven goals, one more than unfancied Luxembourg. They have been flying high on the back of their attackers' performance but need to address their defensive issues if they are to challenge Portugal for Group A honours.

Questions About Luxembourg vs Serbia 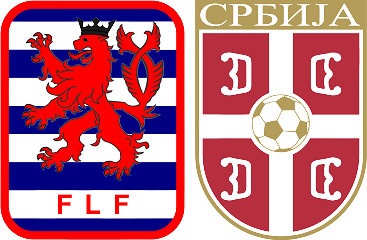 Where is the game being televised? DAZN Deutsch and Viaplay (Fin).

Where is the game being played? Stade de Luxembourg (Luxembourg).