Jerv could move out of the bottom two this weekend when they play host to a Sandefjord side that only sit 3pts and four places above them in the Eliteserien table. The visitors have a good record against Jerv and have looked strong away from home over the last month or so, which should make for an interesting 90-minutes.

Sandefjord might not have that many more points on the board than Jerv but Saturday's visitors have outperformed their guests in most departments so far this season. Sandefjord have won five of their last six encounters with Jerv in all competitions and head into this weekend's clash on the back of three wins from their last four away games, while Jerv have lost two of their last three matches at home.

There is a good chance that we will see both teams score on Saturday, just as they have done in four of their last six head-to-heads in all competitions. Five of Jerv's and each of Sandefjord's last six outings in league, cup and friendly have produced goals at both ends of the pitch, adding plenty more weight to our second prediction for this weekend's match-up in the Eliteserien.

All the latest stats ahead of Jerv vs Sandefjord

A win would take Jerv level on points with their guests

Last time out, Jerv made the tricky trip to Rosenborg where despite giving a good account of themselves, once again the day ended in defeat for the visitors. Schroter continued his good run of form in front of goal, putting Jerv in front after 16-minutes. However, Rogers netted a hat trick to put Rosenborg 3-1 up by the 62nd-minute and while Furtado converted a spot-kick to make it 3-2 in the 73rd-minute, Jerv failed to carve out an equaliser in the time remaining.

Sandefjord had the home advantage against Aalesund last time out and took the lead after just 5-minute via Haakenstad. The teams went in level at the break though, Nenass scoring for Aalesund in the 38th-minute to make it 1-1. Early in the second forty-five, Canadija fired the visitors in front and now Sandefjord needed to muster up a response of their own. Ofkir stepped up for the hosts, equalising in the 65th-minute, and the game ended in a 2-2 draw which was probably a fair result on the balance of play.

Jerv: the hosts boast a clean bill of health and no suspended players this weekend.

Sandefjord: Sander Risan Mørk has a broken foot that looks set to keep him out of action until September. 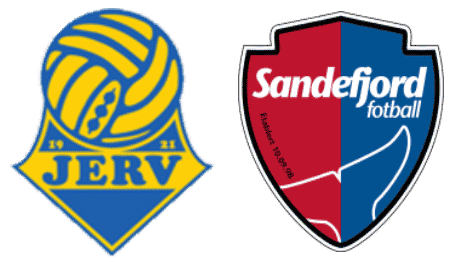