After confirming four league victories in a row, Hoffenheim have reigning champions Bayern Munich lined up for their next attempt. The Reds have also five consecutive unbeaten games ahead of this match. They will be wary of the Bavarians who earned a 7-1 victory in their Champions League decider against Salzburg.

Both Hoffenheim and Bayern Munich have been through a long run of victories and draws recently but the Bavarians have rules in the H2Hs. Four of the last five meetings between these teams witnessed Bayern on the winning side. adding more, the visitors also have managed to get six wins in the last eight away outings. Die Kraichgauer might be confident over two consecutive home victories but the upcoming rivals don’t seem an easy challenge to host. So we expect the FCB to maintain their lead in the first position.

Bayern Munich comes into this game after having a great consistency of scoring in both of their recent homes and away games. Hoffenheim missed the target only once in the last five outings but they don’t seem to have a problem in their home stadium. Die Kraichgauer also scored in four of the last five meetings at their home against the Bavarians. So there would be high chances to witness a BTTS outcome.

Hoffenheim vs Bayern Munich: Check out the best odds and the latest stats

Hoffenheim vs Bayern Munich: Check out the team lineups

Die Kraichgauer have been able to get two home wins in a row against the teams from the bottom of the table but they will have to be more disciplined to face the leaders. However, four consecutive league winnings have helped the team to stay at fourth position in the points table. The club manager Sebestian Hoeneb will have to contend with many unavailable players as he will be having seven names on the injury list.

The FCB comes into this game after knocking out Salzburg with a  7-1 victory to secure the position in the next round of the Champions League. With the help of 19 wins out of 25 rounds, Bayern are first on the table with the lead of nine points. Leon Goretzka and two other players will miss out on the game due to fitness issues.

Questions About Hoffenheim vs Bayern Munich 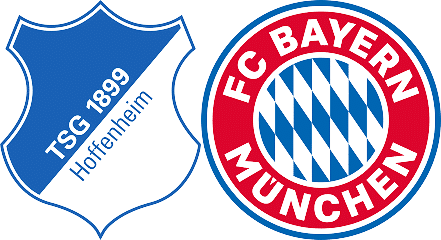 Where is the game being televised? BeIN Sport Connect, Diema Sport 3, and Sky Bundesliga.