Heerenveen seek a first victory over FC Twente for the first time since February 2020. The two teams meet each other at the Abe Lenstra Stadion on September 18, 2022 and this match will be the subject of this preview.

Heerenveen lost for the first time this season as they were thrashed 5-0 by Ajax to register a demoralising defeat. Twente are unbeaten in three games after holding AZ Alkmaar to a 1-1 draw away from home.

A number of doubts are likely to have put into the head of Heerenveen following the loss against Ajax. As Kees van Wonderen goes in search of a reaction from his players, he will also be keen on avoiding yet another defeat, as it may undo the good job done so far this season. Heerenveen lost twice against Twente in the previous campaign, but the away form of Twente has not been exceptional with only one win in three.

The two teams are struggling to hit a lot of goals and this match is likely to be low on goals like four of the last five meetings between the two teams. Twente are a team who have averaged less than a goal per game at both ends of the pitch in away matches this season while Heerenveen have only conceded one goal at home.

Heerenveen will have strong memories from the recent loss against Twente and this will be something that the team hopes to rectify as they head into the weekend. The first defeat of the season came in a strong fashion for Heerenveen as they were thrashed by Ajax. Meanwhile, all eyes will be on Sydney van Hooijdonk, who has been the star performer for Heerenveen with four goals so far.

Twente have gone through a decent set of results that will provide a lot of confidence for coach Ron Jas. Just as the team is struggling for results, the team now has picked up points in three consecutive and two of the recent matches have been against top teams. In such a scenario, Twente will be heading into the forthcoming matches with the lot of Billy.

Heerenveen: Tibor Halilovic is to play missing due to suspension for the game. However, there are no injury issues for Heerenveen coming into the game.

Twente: Michal Sadílek, Sem Steijn, and Michel Vlap are the players unavailable for action, while Julio Pleguezuelo is doubtful for the match.

Top Dutch Eredivisie Stats ahead of Heerenveen vs Twente

Questions about Heerenveen vs Twente 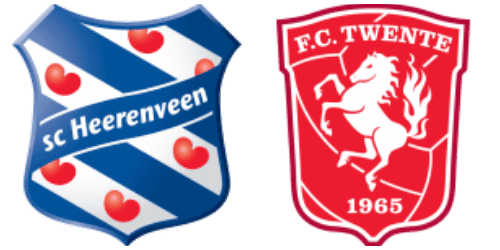 Where is the match scheduled? Abe Lenstra Stadion

Which team is the favourite to win? Heerenveen