Hacken are at home against AIK looking to snap out from the disappointing form shown throughout the Allsvenskan campaign so far. AIK, meanwhile, look to close the gap on the top.

Hacken’s last involvement in the Swedish Allsvenskan saw them pick up a crucial 3-1 win over Varberg. This was the first win of the season for Per-Mathias Högmo’s men. AIK lost ground to the table leaders after being held to a 2-2 draw by Mjällby at home. The best predictions for this match are:

AIK have been a far superior team when compared with Hacken, who have struggled throughout the campaign. The recent win over Varberg should not be a barometer to expect a good performance out of Hacken in this game even if Högmo’s men are at home. AIK have slipped up in some recent encounters with the team only managing a single win in the last four league games. Even then, they should have more strength to get three points from this Allsvenskan game.

AIK and Hacken may be separated by a whopping eight points after just eight matches, but they both have the same number of goals (10) so far. Even in the head-to-head meetings, there is almost little to separate the two teams with a 6-6 total score from the last five encounters. Yet, the visitors will be motivated to catch the table leaders and they have been involved in back to back away games with over 2.5 goals.

AIK to win both halves – yes

Hacken have lost 50% of their home games at half-time and full-time. AIK have not exactly dominated games to the extent where they have won both halves, but the weakness of the opposition could pave way for this outcome, which has occurred only once this season for Bartosz Grzelak’s men in away games.

Hacken have a very disappointing head-to-head record against AIK. Even though the team will be pumped up after the recent win over Varberg, the Sunday encounter will be a mismatch in terms of quality. Yet, the win over Varberg has provided hope for Hacken that they can jump out of the bottom three. Östersunds, in the 13th place, are only two points ahead.

Bartosz Grzelak’s team only need six points to catch Malmo at the top of the table and they also have a game in hand. Yet, recent form is not in favour of AIK, who have been dropping too many points. So far, the team has dropped points against mid-table outfits like Mjällby and this will be a source of concern for the manager. 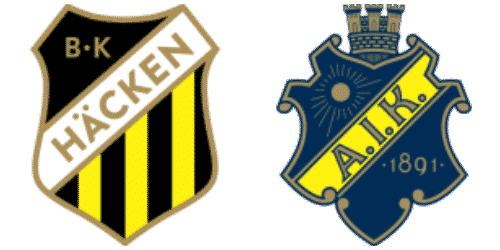 Where is the match scheduled? Bravida Arena in Göteborg

Which team is the favourite to win? AIK