The first FIFA World Rankings of 2021 are yet to be released but we're taking a look at how they ended in 2020. We won't be going through the positions of every nation but we can provide you with the full official list here. We will be taking a closer look at the countries that made the top 10 in 2020 as well as identifying some of the rankings that surprised us the most. 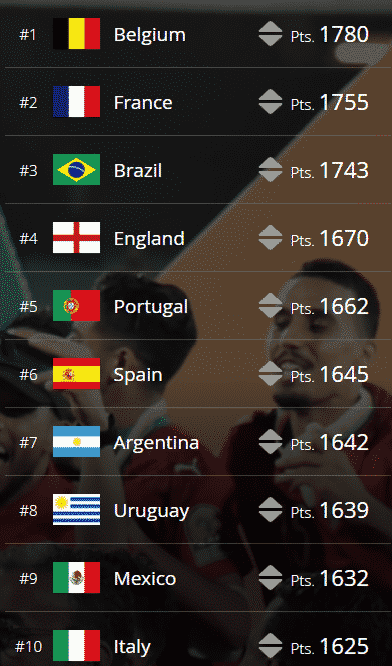 Roberto Martinez's Belgium claimed the top spot in 2020, now all they need to do is win a major international tournament to be truly recognised alongside the likes of England, Spain, Italy, Germany and France. The Red Devils recorded wins against England, Denmark, Switzerland, and Iceland in 2020, finishing top of Group 2 in League A of the National League with five wins and one defeat from their six matches.

France ranked 2nd in 2020, winning five and drawing one of their competitive matches, but did suffer a shock 2-0 defeat at home in a friendly against Finland. Making up the top three we have Brazil. The Little Canary only played four competitive matches last year but did manage to win all of those World Cup Qualifiers against Bolivia, Peru, Venezuela and Uruguay.

Gareth Southgate's England claimed 4th spot in the rankings. England didn't concede a single goal in their opening three matches, beating Iceland and Wales, whilst drawing with Denmark. A win against Belgium in October proved the highlight of the year but was followed up by a defeat to Denmark and a loss against Belgium in the pair's reverse fixture.

Portugal ended up in 5th place, Spain had to settle for 6th position after they drew four of their six matches in 2020, while Argentina ended up in 7th spot. Messi and co didn't lose a single game in 2020, beating the likes of Ecuador, Bolivia and Peru, but only managed a draw at home to Paraguay. Uruguay finished in a creditable 8th place and Mexico pinched 9th spot ahead of Italy who ended up in 10th. The Italians didn't lose a single game in 2020 but they were making up for previous years in which they simply did not perform. Italy drew three and won five of their eight intentional matches last year and look like they could prove a force to be reckoned with in this summer's European Championship.

Croatia and Denmark just missed out on the top 10. Croatia had a poor year, losing five of their eight matches, while Denmark picked up five wins and their only two defeat both came against the number one ranked side, Belgium.

You may have noticed that there were a couple of major countries that failed to make the top 10 of the FIFA rankings last year, namely Germany and the Netherlands.

The Germans actually only lost one game, but it was a big one, going down 6-0 away at Spain in the Nations League. Joachim Low's side started the year with three consecutive draws against Sapin, Switzerland and Turkey and then played out another stalemate in October for a second time against the Swiss. These results didn't Germany climb the rankings and due to a previously poor campaign, they had to settle for 13th place.

The Netherlands finished one place below Germany in the 2020 FIFA rankings, despite starting the year with a home win against Poland. Back-to-back defeats to Italy and Mexico followed and then the Dutch drew their next three games against Bosnia-Herzegovina, Italy and Spain, before ending the year on a high with victories over Bosnia-Herzegovina and Poland.

Scotland qualified for this summer's European Championship by beating Serbia on penalties, yet they still only just managed to finish in the top 50 nations in 2020. The Scots went unbeaten in their opening six matches, winning five and drawing one, but ended 2020 with defeats against Slovakia and Israel in the Nations League.

Senegal are the highest-ranked African side, beating the likes of Egypt, Nigeria and Algeria to that prestigious title. Senegal started the year with a 3-1 defeat against Morocco but recovered well and won their next two matches against Guinea-Bissau without conceding a single goal.

Wales took 18th place, finishing ahead of the likes of Poland, Sweden, Turkey, Russia and the Czech Republic. Jamaica made it into the top 50 and even finished above Scotland, Egypt and Cameroon. The Reggae Boys only played three friendlies in 2020, securing two wins and suffering one defeat. The Republic of Ireland just edged out Northern Ireland by two positions, with the pair both just about scrapping a top 50 finish.

The United States of America finished up in 22nd place ahead of Russia, Japan, Iran, South Korea, and Australia. South Korea have proven themselves to be a good World Cup side yet they only claimed 28th spot in 2020's FIFA rankings. China failed to make the top 50, ending up in 75th position, which will be a disappointment considering all of the money their government has ploughed into the Chinese Super League.

Latvia are one of the lowest-ranked European sides of 2020, finishing below the likes of Tanzania, Rwanda, Turkmenistan and even the Philippines in 136th place. New Zealand will probably be disappointed not to make the top 100 but that is down to the opposition they face now that Australia play in the Asian section. Estonia and the Faroe Islands both ranked lower than India, which just isn't good enough, while San Marino finished in last place, 210th, behind the likes of Anguilla, British Virgin Islands and US Virgin Islands, which is just depressing.

Of the top-ranked sides, England and Belgium will be hoping that they are in with a genuine chance of claiming some much-needed silverware in the summer when the rescheduled Euro 2020 tournament is set to go ahead. While both Germany and the Netherlands have some work to do if they want to return to the top five anytime soon.