The first game scheduled for Sunday in La Liga is the Espanyol vs Sevilla duel. If you want to learn more about this game, check our thoughts and free betting tips for this duel.

Our latest betting predictions and picks Espanyol vs Sevilla

If you are looking for the top La Liga betting predictions, including our best tips for Espanyol vs Sevilla, check them out right here:

While Sevilla has a congested schedule and a few injury problems, the team is also in the title race in the league and this seems like their best chance to actually become champions.

So, our prediction is for Sevilla to win this game. After all, the team is unbeaten in the last ten games in the league, while Espanyol failed to win in the last five. Also, Sevilla beat Espanyol in four of their last five h2h duels.

Three of the last five head-to-head meetings between Espanyol and Sevilla have gone under 2.5 total goals and we can see that being the case once again on Sunday.

The latest odds and key stats for Espanyol vs Sevilla

If you want to bet on the best odds for Espanyol vs Sevilla, take a look at our selection of odds from the top UK betting sites:

The two teams aren't close in the standings, but this can still be an exciting match. So, let's check both teams out in more detail:

The last round of La Liga was very exciting for Espanyol since the team nearly missed out on a win in the city derby against Barcelona after conceding a goal in the stoppage time. Despite this, the fans can be happy with the team's performance in that game. In the last six games, Espanyol has one win, two draws, and three losses, so they are not in the best of forms.

Manu Morlanes and Nico Melamed will miss this game after being sent off in the game against Barcelona last weekend, but other than that, Espanyol is in great shape when it comes to team's health.

After three straight draws in La Liga, Sevilla finally managed to win a game in the last round against Elche. That being said, Sevilla is unbeaten in the last ten rounds of La Liga and they are firmly keeping up with Real Madrid in the title race since they are now just four points behind them. Sevilla also had a tough mid-week game against Dinamo Zagreb in Europa League, but they managed to turn that game around and win.

When it comes to team news, Sevilla has a few problems with the squad. Karim Rekik, Gonzalo Montiel, Erik Lamela, Suso, and Jesus Corona are all out with injuries, while Marcos Acuna is suspended for the next game.

The most common questions for Espanyol vs Sevilla 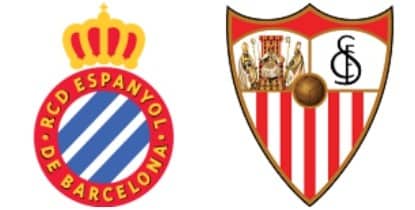