The last game in La Liga scheduled for Sunday is the city derby, Espanyol vs Barcelona. If you wish to know more about this game, check our preview and our free betting predictions.

Our bets Espanyol vs Barcelona betting tips and predictions

If you need a bit of help to find the right bet for the Espanyol vs Barcelona duel, check our top betting picks for this game:

So, our prediction for this game is for Barcelona to win. After all, they are the better team and they beat Espanyol in four of their last five h2h meetings.

Although both teams score in just one of the last five head-to-head duels between Espanyol and Barcelona, we can see that happening on Sunday in their next game.

The reason lies in the fact that both teams scored in 57% of all Espanyol matches in the league this season, while the same thing happened in 64% of all Barcelona games in La Liga so far.

The latest stats and top odds Espanyol vs Barcelona

If you want to bet on the best La Liga odds, including the top odds for Espanyol vs Barcelona odds, check them all out right here:

It's always exciting time when Barcelona's city derby comes around, so let's check out the two team in more detail before they meet on Sunday:

Although Espanyol can be happy with their current situation since they are pretty much safe in the middle of the standings after just getting back to La Liga this season, the team is not in good form right now. In the last six games, Espanyol has just one win, along with one draw and four losses. Still, as we said, they are currently safe, nine points ahead of the first team in the relegation zone.

Espanyol will be without the Oscar Gil this weekend through suspension, while Fernardo Calero is doubtful with an injury. On the bright side, the team's top goalscorer Raul de Tomas will be back in the team after he served a suspension in the last game.

It seems that things are coming together in Barcelona after all the tough times they had this season. The team managed to win four of their last six games in La Liga and climb to the fourth spot in the standings, right over the reigning champions Atletico Madrid who they beat last weekend. So, there are many positives at Blaugrana right now.

However, there are still many absences as well. Samuel Umtiti, Sergi Roberto, Ansu Fati, and Alejandro Balde are all injured, while Eric Garcia, Clement Lenglet, and Memphis Depay are fitness doubts. Also, Dani Alves will have to miss the city derby through suspension. 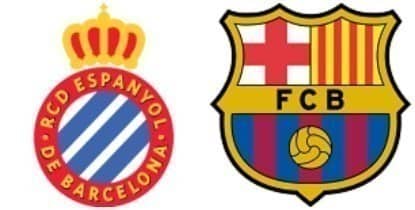