Euro 2020 has produced one of the biggest rivalries in international football for the last 16 as England take on Germany at Wembley. Southgate's men head into this game as the bookmaker's favourites to progress but as all England fans know, it's never quite as simple as that.

Read on for our full match preview and prediction for England vs Germany in the European Championship.

England vs Germany: Our Best Bets

England haven't offered much going forward in this tournament but they are also yet to concede a goal and we're backing another game featuring Southgate's men to produce under 2.5 goals. Fewer than three goals have been scored in three of the last four meetings between these two countries. Each of England's last five fixtures have seen under 2.5 goals scored, while two of Germany's last three games against top opposition have also featured under 2.5 goals (against France and Denmark).

Germany edge the head-to-head record between these two nations, picking up 15 wins (including penalty shootouts), 4 draws and 13 defeats. The Germans have secured four wins from their last seven encounters with the English and have won both previous penalty shootouts between the two countries (1996 & 1990).

England vs Germany: The Stats and Figures

Gareth Southgate's England have proven to be a very tough nut to crack at Euro 2020 and while they might not have impressed in the attacking sense of the word, England have been very impressive defensively. If you believe that Southgate's boys will deliver the good inside the opening 90-minutes, then here are a few of the markets you might be looking to back.

England Draw No Bet @ 4/5 with Betfred

England have certainly underwhelmed at the Euros so far, often looking void of creativity under the guidance of a very defensive-minded Gareth Southgate. However, the Three Lions are yet to concede a single goal at the tournament and that in itself is a basis for success. If England can get Harry Kane into the box more and if he can score his first goal of Euro 2020 then surely England will be a force to be reckoned with. However, many of the fans have been left frustrated by the team's negative style of play and fear the worst when England do come up against a decent team, such as Germany.

Germany haven't had things all their own way at Euro 2020 and defensively that have looked frail. However, in their final two matches, Low's men did find their scoring boots, netting 6-goals, and this will give Germany the belief that they can outscore Southgate's England. Germany have been involved in a number of high-scoring matches of late but may have to concede that the game against England is going to be much more tight and tense. If the match does go in extra time and possibly penalties as we have predicted, then Germany could have the edge over the English.

England vs Germany – Your Questions 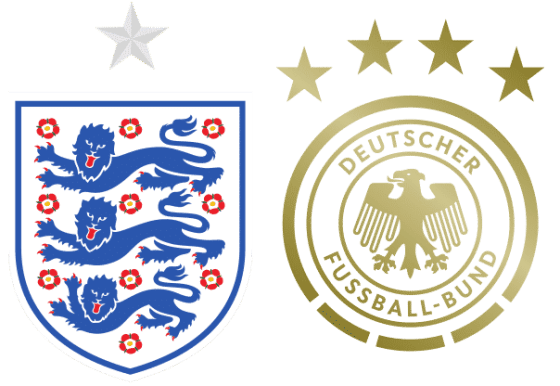