Top free betting tips and odds for Dortmund vs Wolfsburg

The fixture at Signal Iduna Park sees Dortmund fighting it out against the guests, Wolfsburg. The teams enter this field after adding three points to their names.

Dortmund doesn’t keep an acceptable record in the recent home duels of various home duels, losing three of the last five. Nevertheless, the BVB have been exceptional in hosting H2Hs against Wolfsburg by winning all of the previous three. Adding more to this, the Wolves are also winless from the recent three away outings, losing the last two consecutively. Hence, the hosts  will be our favourites to get the lead after ninety minutes

Wolfsburg scored four goals in their previous meetings at home but the team’s front line has been lagging in previous games and didn’t score in two of the last three. Dortmund also added six goals in the previous five games of the Bundesliga. Furthermore, most of the teams’ H2Hs at the home of Dortmund ended under 2.5 goals. So seeing the current flow of goals, we predict the same pattern for this game as well.

Dortmund vs Wolfsburg: Check out the best odds and the latest stats

Dortmund vs Wolfsburg: Check out the team lineups

The Black and Yellows finally got back to the winning sequence in the last game where they defeated Stuttgart by 0-2. The recent winless games left the club with a trail of nine points from the first, standing at the second with 60 points. The club manager Marco Rose will be disappointed to have still 10 players with fitness issues.

After conceding three defeats in a row, Wolfsburg managed their victory in the last game against Arminia Bielefeld. Following their 15 defeats out of 29 Bundesliga attempts, Wolfsburg sees themselves at the thirteenth position in the standings. William and Paulo Otavio will be the players on the injury list ahead of this game.

Questions About Dortmund vs Wolfsburg 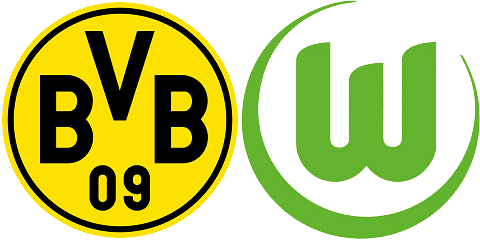