Borussia Dortmund kickstarted the second half of the campaign with a hard-fought victory over Eintracht Frankfurt on the road. They will be in the comforts of the Signal Iduna Park for their next Bundesliga outing against fellow top-four candidates SC Freiburg.

Dortmund has had issues against Freiburg, being found wanting in their last two meetings. Der BVB were on the road in those losing affairs and will be confident in their abilities at the Signal Iduna Park. They have 12 of their 13 home fixtures against the Vultures and should add to their tally. Confidence in their ranks will be high following their 2-3 win over Frankfurt as they continue to give chase to Bayern Munich.

Alongside Robert Lewandowski, Erling Haaland is the other luminary of Bundesliga. The Norwegian forward has struggled with injuries this campaign but it has not impacted his performances on the pitch. Haaland has scored 19 goals in 17 competitive appearances, with 9 goal contributions, seven goals and two assists in his last eight competitive outings. He has not scored in his last two outings for Der BVB and will be gunning to overcome this minor goal drought.

Dortmund vs Freiburg: Check out the best odds and the latest stats

Dortmund vs Freiburg: Check out the team lineups

Eintracht Frankfurt gave Der BVB a scare after taking a 2-0 lead in the first half. Marco Rose's men replied spectacularly with three second-half strikes to claim the three points on offer. They will want to build on the result against Freiburg, who have emerged as a surprise contender for UEFA Champions League places this season. Dortmund has not lost to their rivals in 13 home fixtures and are justifiably favourites in this meeting.

In his tenth year in charge of SC Freiburg, Christian Streich will be pleased with their Bundesliga standing. The VUltures are fourth on the points table, defying expectations and maintaining their attack on the established hierarchy. They have overcome their stumbles and are primed for an interesting second half of the campaign. Key to their success will be the continued excellence shown at the back as Streich's tactics have led to their billing as the joint-best defensive unit in German top-flight football.

Questions About Dortmund vs Freiburg 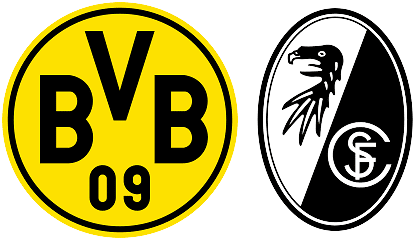 Where is the game being televised? DAZN Deutsch and Sky Sports Mix.