Dordrecht caught the eye on social media last week as they celebrated taking the lead in bold fashion before ultimately losing. Should they take the lead here, will they see it through? Find out with our Dordrecht vs MVV match preview with free tips, predictions and odds mentioned along the way.

Both teams will bag goals

We end our tips for this game by backing a home win. That might sound like a rather big shout with the fact they've won just two of their last five matches but, actually, their home record is pretty damn sound with just one defeat in five where each of the other four games saw them win. MVV meanwhile have only lost in one of their last five but away from home they struggle; they've lost two of their last four and don't have an away win to their name so far this season. They've also lost to Dordrecht in two of their last three visits.

Here are the key stats & form guide for Dordrecht vs MVV

Can Dordrecht pull clear of the bottom of the table scrap?

Right now, MVV are sitting by far the prettiest of these two sides in the table, however, things can change very quickly in sport and this game could be proof of that. A MVV win would move them seven points clear of their hosts. Lose though and Dordrecht will be just a point behind them and they'd, potentially, jump four places in the table.

Football is a game of fine margins and Dordrecht found that out last week. They were leading through an Aliou Balde goal but he was then red carded and they lost the game meaning they now sit just two points above the foot of the table. Alongside the suspended Balde, the home side are also set to be missing Malhory Noc and Ruggero Mannes.

MVV Maastricht have made a fairly decent start to the campaign and, as it stands, are just outside of the promotion/relegation playoff places. With just Clint Essers missing ahead of this match, they'll be confident of getting another win chalked up.

A quickfire FAQ on Dordrecht vs MVV 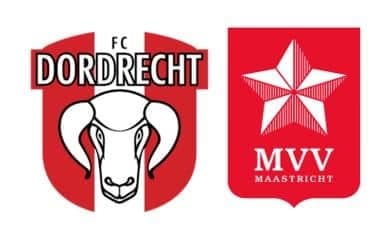