Wayne Rooney's men continue to fight against the adversity they face; they're doing a good job of it too. Can they get more points on the board when they host Swansea. Find out with our Derby vs Swansea match preview with free tips, predictions and odds mentioned along the way.

Derby vs Swansea: Our Picks

Derby sit bottom of the table but the standings do not tell the full picture. Since the start of the season they've looked up for the fight and that's definitely the case now. Rooney has them well drilled defensively, which means their lack of goals isn't too much of a concern. For Swansea, their form is all rather ‘meh'. They have a lot of the ball but don't always play in the right areas and, as proven in their loss to Fulham, that can gift attackers far too much space when things break down. That approach will give Derby a chance but we still fancy Swansea to create enough openings to take a point.

Derby are bottom of the league. They're also bottom of the average total goals per game table too with a snooze worthy 1.5. Swansea also come up short of the 2.5 cut off with their average of 2.3 whilst recent form doesn't suggest they're numbers that will change anytime soon. Three of Swansea's last five games have come in under 2.5 whilst Derby have only seen three or more goals in one of their past five matches. In terms of the head to head record, again, three of five have fallen short of the 2.5 mark.

1-1 and thank you very much

A draw at under 2.5 goals doesn't leave too many score predictions open but we're plumping for 1-1. Derby don't score many goals with an average of fewer than one per match. They set up to be hard to beat but, inevitably, opposition do create something. We think that will give Swansea a chance of bagging. The Swans will give up some opportunities too though as they tend to overplay at times. For those reasons, 1-1 is a prediction that we feel offers up decent value.

The best odds for Derby vs Swansea

It doesn't matter that the announcement was made a few weeks ago, all the talk about Derby focuses on their off field issues. Wayne Rooney is proving himself at the moment though and his team look ready to run through brick walls for him. Defensively they are well structured but with Tom Lawrence and Ravel Morrison in midfield they do have creativity too. Swansea's season still struggles to get going under their new manager. They want to play a possession based game, which they do, but knowing when and where to play is proving an issue; at the moment, they're easy to play against and they could do with their midfielder adding some more bite.

Quickfire questions on Derby vs Swansea 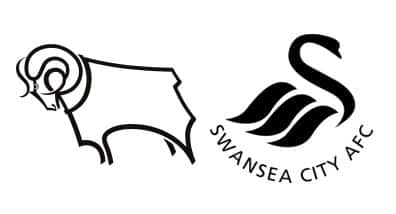