Derby banked a huge win last time out. Can they follow it up with another positive result back in front of their own fans? Find out with our Derby vs Middlesbrough match preview with free tips, predictions and odds mentioned along the way.

Derby vs Middlesbrough: Our top tips

Derby have just won their first game of the league season so it's not like they're a juggernaut on a roll; what it does mean though is that the team will be absolutely buzzing; that's particularly true when you consider the adversity of everything else. On top of the league win though it now means Derby have only lost once in five. By contrast, Wednesday night saw Middlesbrough fall to another defeat. With just one competitive win from their last five every game looks tough; this will be no different.

Goals will fly in

If the match result was a little difficult to decide upon then the over 2.5 prediction was pretty straight forward; we're going over. Derby have averaged 2.8 goals per game over their past five fixtures with two of the games exceeding the 2.5 cut off. For Middlesbrough, their last three have all gone over 2.5 with two three goal games and the one on Wednesday that saw five goals. With that considered and the fact that the last three meetings have all broken 2.5 goals, these odds look good value.

Our final prediction is for Derby to open the goal scoring. The reason we're offering such a tip is because Derby have taken the lead in each of their three Championship matches. With that stat and the fact that Middlesbrough have been conceding an uncharacteristic amount of goals lately then it sounds completely plausible.

Find the best odds for Derby vs Middlesbrough

Another win for Derby would be huge

Wayne Rooney's Derby were tipped for a painful season and it looks like it will be exactly that but courageous performances like they put in against Hull on Wednesday will definitely help their fight to stay in the second tier. Phil Jagielka and Sam Baldock impressed in the midweek game but whether they can muster another game we don't know. For Middlesbrough, there is a feint sign of alarm bells ringing. Chris Houghton is supposed to be the man when it comes to organisation and keeping things tight but it's not working all that well with no clean sheets.

Pre-game thoughts on Derby vs Middlesbrough 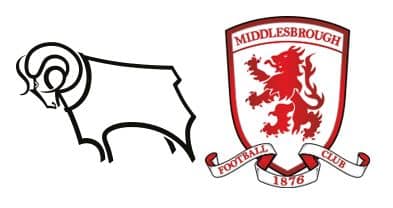