If Derby have any chance of actually pulling off the great escape then home games against Hull are 100% must wins. Will they win it? Find out with our Derby vs Hull match preview with free tips, predictions and odds mentioned along the way.

This is an almighty tough match to call. On their day, both of these teams are capable of beating each other but we just side with Derby to take the point here. Wayne Rooney has seen his team battle hammer and tong so far this season; they've got serious guts. With a must win game and their home fans behind them we think they'll do enough even if Hull has won three in the spin prior to their defeat last time out. The Rams have a good head to head record against Hull too; they've won four of the last five clashes.

If the match result is tough to call then at least the total goals market looks somewhat simpler to predict; we're going under 2.5. Derby have fallen short of the 2.5 mark in three of their last five whilst each of Hull's last five matches have lacked goals; each have gone under 2.5 with just eight goals scored in total. On top of that, you have to back to 2018 to find a time when these two last shared three or more goals.

Check out the key stats & form for Derby vs Hull

Hull should be safe from relegation but lose a match like this and they might just start sweating. If Derby lose, they're as good as done. It could be a cagey affair but one you don't want to miss.

Derby have showed crazy levels of fight so far this season but they'll need to dig even deeper ahead of this game after suffering yet another knock back by losing last time out. Derby cannot lose this game and a win for them would be huge.

This game might be big but looking at the calendar a month ago it could have been much bigger. Hull have won three games since then to drag themselves largely out of danger; a win over Derby would almost confirm their safety. Lose though and it's a slippery slope back into the battle for survival.

A brief FAQ ahead of Derby vs Hull 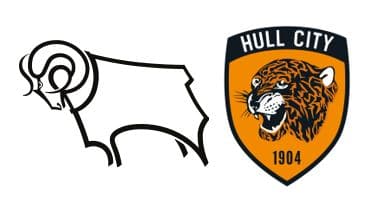