Coventry vs Hull: Check out our betting tips

Coventry still have a slim chance of making the playoffs if they can gather some winning form between now and the end of the season. Can they take three points here? Find out with our Coventry vs Hull match preview with free tips, predictions and odds mentioned along the way.

The Sky will be Blue over Coventry on Wednesday

We begin our predictions for Coventry vs Hull by backing the home side to win. The Sky Blues aren't boasting the most incredible form coming into this match with just two wins from their last five but there are still a few reasons we can give that show why Coventry are fancied to win. Firstly, Hull's form is ropey at best with just five points from the last 15 available. Secondly, they've lost the last two head to head games against Coventry and, finally, if you saw Coventry's last game against Sheffield United you'll know they looked a different class in that game. If that Coventry turn up, there is no way Hull avoid defeat.

Our next prediction for this game is that both teams will score. It's probably a tad ambitious given Hull have blanked in their last two games but they've netted four goals across their last three games, which shows they are capable in front of goal even if not prolific. More key to this bet though is Coventry's defence; they've kept just one clean sheet in their last 10 games and none in their most recent five. At 10/11 (1.91), we think that's a value bet.

Here are the key stats & form guide for Coventry vs Hull

Hull might be right near the bottom of the table but their relegation concerns are very, very limited. Coventry meanwhile have some very slim chances of making the top six. If Hull win this game, that's safety virtually guaranteed. It would end Coventry's dream of a late surge for the top six too.

Coventry sparked back into life at the weekend by putting Sheffield United to the sword. It means their playoff hopes, which had been much stronger earlier in the campaign, aren't quite dead yet. Within that win, each of their three most attacking players bagged goals too. They'll surely be unchanged.

Hull are fifth from bottom for a reason namely they're not very good. What they have been this campaign though is good enough and there is next to no chance that they'll go down. If they can get to the summer without any mauling it will be seen as a job well done for the Tigers after only coming up last season. We can't see many changes on their XI either after an away point last time out. 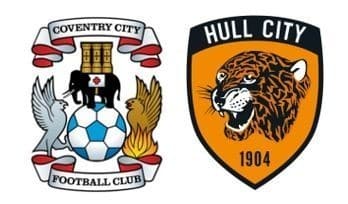