Coventry vs Derby: Our betting tips

This all Championship tie sees a promotion contender and  probable relegation fodder face off for a place in round four. Will it be as simple as the highest placed side winning? Find out with our Coventry vs Derby match preview with free tips, predictions and odds mentioned along the way.

Sky Blues to go through

Coventry find themselves on a six game winless run heading into this match whilst Derby are unbeaten in four games having taken 10 points from the last 12 available. Despite those contrasting fortunes, we are still making the prediction that the Sky Blues win. Why is that? Well, mainly because Derby do not have the time for any distractions in their ambitions to complete the greatest of escapes; any changes they make to their lineup will weaken them significantly too.

If we are throwing the form book out of the window in respect of the match prediction, we are bringing it back in for our total goals tip. We are backing under 2.5 goals. Three of Coventry's last five games – including the last two – have gone under the 2.5 mark. Derby have a similar record with three of their past five matches coming up south of three goals as well. Each of the last six head to heads have seen a maximum of two goals too!

Check out the key stats & form for Coventry vs Derby

There are two ways you can look at an all Championship clash in these competitions. On one hand, it's a game you don't really need and could easily lose. On the other, it's an opportunity for someone to proceed to the next round with things being on a broadly even footing.

Coventry's recent form has seen them fall away from the top six in the league; this match will be an opportunity for them to get back to winning ways without the same pressures. The only question is how many changes are made.

Derby are making a real go of what looks like an impossible task in league terms but they do not need a cup run; that's a fact that cannot be denied regardless of what line the club might peddle out. They'll likely make changes but it will weaken them a fair bit.

A brief FAQ ahead of Coventry vs Derby 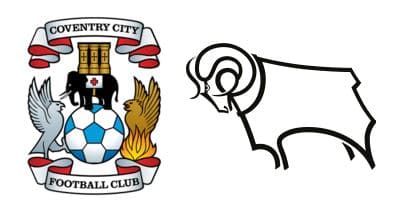