Coventry's playoff dream is all but over. Blackburn's, however, is very much alive. Three points here would help; will they get them? Find out with our Coventry vs Blackburn match preview with free tips, predictions and odds mentioned along the way.

Blackburn will not lose

These are two teams that have struggled to win games in recent weeks; Coventry have won just one of their last six games, they drew two and lost three of those six games. Just like Coventry, Blackburn have won just one of their last five games; they drew one and lost three of those games. However, it's important to point out that Blackburn have done fairly well against Coventry in recent encounters; they have no losses in their last four clashes with Coventry. With this in mind, we believe that Blackburn will take at least one point from this match.

Coventry have not done a good job defensively, they've conceded a lot of goals over the course of their season; as a matter of fact, Coventry conceded in their last seven, and 12 of their last 13 games. Conversely, Coventry have scored their fair share of goals; they found the net in six of their last eight games. Both teams scored in five of Coventry's last seven games. Like Coventry, Blackburn have conceded their fair share of goals, especially recently; they have seen their defence breached in all of their last three games. It's also worth mentioning that both teams tend to score when these teams play each other; they did so in six of their last eight encounters. On that note, we believe that both teams will find the net.

Here are the key stats & form guide for Coventry vs Blackburn

Coventry vs Blackburn: Let's look at the predicted lineups

Both of these sides have looked decent in spells this season but, with just a handful of games left, only one has a realistic shot of making the top six; that's Blackburn. Winning at Coventry won't be easy but it would be a big result.

Coventry have had some disappointing results in recent weeks; they've won just one of their last six games, with two draws and three losses. Mark Robins' men will host Blackburn Rovers on Saturday; they'll hope to improve their poor form with a win.

Things have not gone too well for Blackburn Rovers recently; they have lost three of their last five games, winning just once in that stretch. Tony Mowbray's men are sixth on the Championship table, barely hanging onto the last available promotion playoff spot; they'll hope to get some momentum going with a win.

A quickfire FAQ on Coventry vs Blackburn 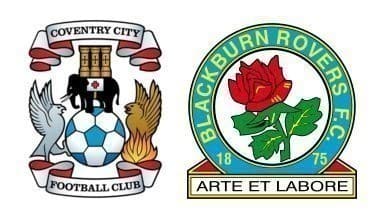