Cardiff vs Stoke: Check out our betting tips

This game sees 15th take on 17th in a game that will ultimately count for little in the grand scheme of the season. There is still an opportunity for punters though so who will win the match? Find out with our Cardiff vs Stoke match preview with free tips, predictions and odds mentioned along the way.

Cardiff to take the win

Stoke have now gone over a month without a win and we see that eight game winless run becoming nine here. In some part, it's because of the poor form Stoke have shown with four draws and four defeats in their last eight. The other aspect of this prediction is based off the form Cardiff have displayed in recent weeks; the Bluebirds are unbeaten in three having taken seven points from their last nine available. On top of that, Cardiff edge the head to head record as well. In the last five meetings between the two teams, two have ended level, Cardiff have won two and Stoke have just the solitary win – that was back in 2020.

Our next tip for this game is that we'll see at least three goals – or as our suggested bookmaker, Betfred, puts it over 2.5 goals. Statistically, it's far from nailed on but based on the way the odds sit, it is unquestionably the value bet. Cardiff's form across the last five has seen them go over the 2.5 mark just once. Stoke, however, have gone over 2.5 three times in their previous five outings. Two of the last three head to head games have gone over 2.5 as well with the reverse fixture, which took place in late October, saw six goals.

Here are the key stats & form guide for Cardiff vs Stoke

If we're being honest, this game is a nothing event with the result going to have very little bearing on the rest of the season with the exception of perhaps moving Cardiff and Stoke up or down a position or two.

Has Cardiff's season been a good one? No, not remotely. It's also not been nearly as poor as it looked like being at one stage. If you had offered the Bluebirds a practical guarantee of safety in mid-March, they'd have taken your hand off.

Stoke's season has been a story of inconsistency and, as such, they're best hope for the remaining six weeks is that they'll sneak into the top half. Even that isn't a banker though and they'll find themselves level on points with their hosts if they lose. 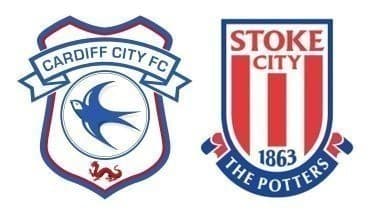