After losing to Feyenoord, Twente regained its composure and returned to its winning ways against Groningen keeping its top-five position intact.

Cambuur had a peculiar run of results recently demolishing the mighty PSV 3-0, and then losing with the same scoreline at home to Vitesse. Inconsistency has been a problem for the team managed by coach Henk de Jong. However, even though Twente are fifth in the league, way beyond what Cambuur has achieved this season, most of their positive results came on their home turf. Away from their fans, they are struggling with only four points in five games.

Three out of the last five matches of this team ended with less than three goals. When it comes to this season, both of them are in the bottom half of the league with Cambuur playing at the 5-5 mark with Twente having one more game with an over goals on their account. However, when they play against each other, more often than not, their strikers seem to misfire. One important thing is worth noting as well, Twente only conceded seven goals this season, the best stat in the league.

Important information about Cambuur vs Twente

The most important question for Cambuur coach Henk de Jong is how will he concept his team to have a chance of beating goalkeeper Lars Unnerstall who is at the top of the best defense in Eredivisie. Twente only allowed seven goals this season, which is the best mark in the league, and with Cambuur having a lagging strike power, it will be a challenge for the home side to get to the back of the net. The home side only scored eight goals this season with defensive midfielder Mees Hoedemakers their best scorer with two goals.

Twente's terrific start to the season has everything to do with their home form. They are one of only two teams, the other being PSV, who have a perfect 5-0 record at home. However, this time around they will be a visitor which is a whole different situation for Twente whose players seem to have all sorts of problems playing away from home. They only have one win, a draw, and three losses which is simply not good enough for coach Ron Jans. Most of their problems playing away from home come from their low-efficiency rating. Out of 18 total goals scored this season, only three were accomplished playing as a visiting team. Their goal difference after ten matches is 18-7, but the away mark is at 3-6.

Twente: Michal Sadilek is a doubt, Dimitrios Limnios and Christos Tzolis are injured.

FAQ about Cambuur vs Twente 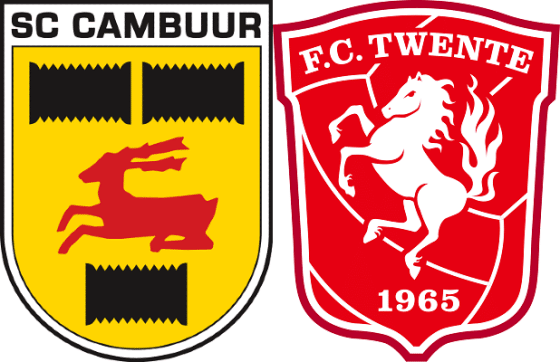