The Serie A leaders, AC Milan, make the trip to struggling Cagliari on Saturday looking for at least a point to keep them top of the table. Cagliari could slip back into the relegation zone this weekend if they lose and don't have a good record against this weekend's visitors.

Former Arsenal striker, Olivier Giroud joint-top scores for AC Milan in the league this season with 8-goals, alongside Leao and Ibrahimovic. The veteran striker signed from Chelsea in the summer has scored 5-goals in his last eight appearances for AC Milan in all competitions, so you can see just why we're backing the Frenchman to score on Saturday against Cagliari.

AC Milan looking to strengthen their grip on the top spot

Cagliari were away at Spezia last weekend and didn't do enough during the 90-minutes to deserve anything from the game. The first half ended goalless but 10-minutes after the restart, Spezia went in front. The home sides wrapped up all 3pts in the 74th-minute when they scored their second goal of the game, nothing more than Spezia deserved. Cagliari remain in danger of being relegated and the battle to see who avoids the drop looks highly likely to go all the way down to the final game of the campaign.

AC Milan would have been expecting a tough test at home to mid-table Empoli last time out, and that is just what they got. Kalulu scored the game's only goal for AC Milan in the 19th-minute and despite both teams having chances to score more goals in the game, the scoreline ended 1-0 in AC Milan's favour. AC Milan continue to look strong at the top of the table but there isn't much of a gap between themselves and both Napoli and Inter Milan, so any points dropped this weekend could prove costly.

Cagliari: Nández, Ceter, Strootman, Walukiewicz and Rog could all miss the game against AC Milan through injury.

AC Milan: Tiemoué Bakayoko is the main injury concern for the visitors this weekend. 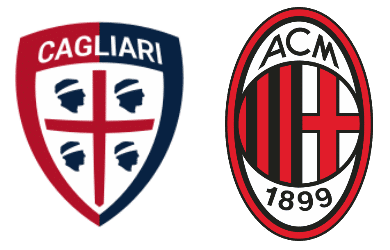