Watford vs Burnley: The Predictions

What a huge weekend this could be for the future of both Burnley and Watford in the Premier League. Back-to-back wins have taken Burnley out of the drop zone and another win this weekend could take them above Leeds. Watford simply have to win on Saturday as they currently sit 9pts off safety with just 5-games left to play.

At least three goals have been scored in three of the last six league meetings between these two clubs, and we're backing goals on Saturday. Five of Watford's last six outings in the Premier League have produced over 2.5 goals with Saturday's hosts failing to keep a single clean sheet during that period. Burnley have only failed to score in one of their last five fixtures and both teams scored in Burnley's last away game against West Ham.

Dennis has impressed for Watford this season, despite his club sitting in the relegation zone heading into the final few games of the campaign. The Nigerian international has scored 10-goals in the Premier League alone and also leads Watford's assists chart. The 24-year-old scored in Watford's last home game against Brentford and we're backing him to score against Burnley on Saturday.

All you need to know ahead of Watford vs Burnley

This is a must-win game for Watford

Watford were never expected to pick up any points away at Man City but they could have hoped for a decent performance from their players. However, Man City ran out 5-1 winners in the end with Kamara scoring a first-half consolation goal for the Hornets after good work from Dennis who claimed an assist. That result left Watford sitting second from bottom of the Premier League table, 9pts behind Burnley.

Burnley were looking to secure back-to-back wins when they played host to Wolves last time out. The game itself was tight and tense as most people expected and in the end, it was settled by a solitary second-half goal from Vydra. Burnley have moved out of the relegation zone and appear to have the bit between their teeth but Everton, who slipped into the bottom three last weekend, still have a game in hand.

Watford: Sierralta, Kalu, Kucka, Femenia, Baah and Suarez could all miss out this weekend through injury.

Burnley: Mee, Cornet, Gudmundsson, Westwood, Pieters and Rodriguez are all doubts for the trip to Hertfordshire. 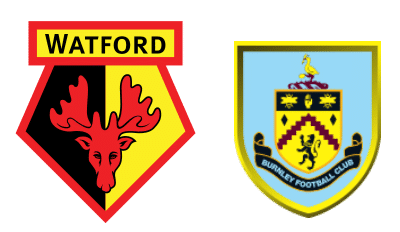